When Gabriel Smolnycki graduates, his diploma will list his major as mechanical engineering in the College of Engineering and Computer Science, but that won’t capture the full breadth of his Syracuse education. In addition to mechanical, he’s taking electrical engineering courses and earning minors in math and music performance. He’s also working on a biomedical research project and heading up the electrical work for SU’s chapter of Formula Society of Automotive Engineers (SAE) as well as the Rocket Club. 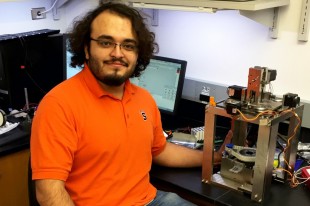 In addition, Smolnycki performs in the Hendricks Chapel Choir and University Singers. By his own admission, he is someone who doesn’t relax and spends most of his “free time” writing lab reports or playing in a band with friends. In speaking with him, one gets the impression that he wouldn’t have it any other way.

With so many disparate interests, how do you define yourself?

As someone who wants to know how things work. My degree will only be a single line on my resume, but I’m making sure that the rest will convey the extent of my education—designing cars, rockets, robots, research work and singing. It’s not enough for me to say that I’ve earned a degree. I want to be able to show how I apply my knowledge in tangible ways. I’m very focused on the real-world applications of engineering. I’d rather build an actual system than simulate one.

Some might see music and engineering as two subjects on opposite ends of the spectrum. What is it about music that appeals to you as an engineer?

I see parallels with music theory and engineering concepts. Music is very structured, just like engineering. If you can understand a mathematical proof, then you can follow and analyze music. Like math and engineering, it has certain rules.

Plus, I believe engineering and music are both subsets of something else. When you think about it, something physical like a suspension bridge ultimately works because a whole bunch of equations on a page say it will. In a way, it’s made out of math. It works the same way with music. If you write a musical composition that follows the mathematical rules of music theory, it’s going to sound good. In both engineering and music, the numbers represent something real that you can see, hear or feel.

What inspired you to pursue engineering?

About 10 years ago I got a little Radio Shack circuit board kit that was probably made in the ‘70s—the old version, where you could hurt yourself if you messed up. It came with an instruction manual for circuits you could build and I went through that and learned to do it but quickly started to think, “What else can I do?” and started to build whatever. I made a couple calculators and a metronome. Sometimes it would work, sometimes it wouldn’t, but I was having fun doing it.

You’re involved in undergraduate research with Professor Michelle Blum. What are you working on?

We’re mainly focused on tribology of joint replacements for human knees. We study the friction and wear properties of the materials that are used in these joints. My job is on the electrical/programming side. We’ve built a machine that simulates the full six-axis motion of the knee during a standard human gait cycle. We’re going to take materials that we know are used in current knee joints, real knees and new materials, and test them all to learn how to extend their life.

How does mechanical engineering differ when it is applied to the human body?

One of the big things when dealing with the human body (or even parts that we make) is that nothing is as precise as we want it. You can only cut up bones so accurately. The data that we want to collect needs to be very accurate to be meaningful, but the actual physical thing just can’t be without some luck. That’s very different from say, my work with the Formula SAE team, where we can machine metal pieces to the exact size and shape that we need.

Why did you choose Syracuse University?

Here I’m given the flexibility to study many different subjects at once—inside and outside of engineering. There are so many great opportunities to get involved. There’s so much happening on campus, you could never even find it all. That suits me.

What’s next for you?

I want to earn a master’s in computer engineering to complement my skill set and will start taking classes toward that, then I want to be out there working.

I want to end up in the nexus between mechanical, electrical and computer engineering. I want to be able to control something mechanical with an electrical device that is run by computer, which is itself collecting mechanical data. Most of the time people think of robotics, but these concepts can be applied to other things, like a car. For example, in the FSAE car we’ll have electric shifters, so I’m designing an electric clutch. Plain and simple, we can design electronic controls to be more precise, much faster and less error-prone than people. I want to work with systems like this.

I want to be an electronics expert, but I also want to be the person that people can go to for trusted info and if I don’t know, then I’m connected and involved enough to know who does.