Last fall, students in College of Engineering and Computer Science Professor of Practice Svetoslava Todorova’s Introduction to Environmental Engineering class had their day in court. 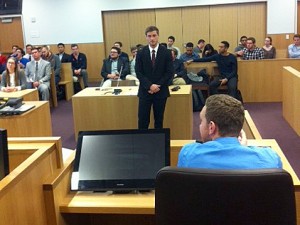 A student testifies during the mock water contamination trial.

As an exercise in learning about groundwater and contaminant transport in the subsurface, students analyzed a case of water contamination and took on the role of defense attorneys to defend three industries that were alleged to be to blame.

The two-week-long exercise was modeled after a trial in Europe in which drinking water was contaminated with tetrachloroethylene, trichloroethylene and dichloro-ethylene. Given scientific data from a two-year monitoring program, students performed calculations and developed graphs to show the groundwater flow paths, potential travel time and plume development for the contaminants. Once they had gathered their scientific evidence, the class was divided in three groups, each representing one of the three accused industries.

The activity culminated with a mock trial in one of the College of Law’s teaching courtrooms, where each group presented its scientific evidence to a jury of engineering freshmen. They pleaded their case to disprove that the companies they represented were responsible for the contamination.

“I wanted my students to experience an educational exercise that promoted learning on many levels. Here they were able to provide accurate calculations, achieve a thorough understanding of the material, develop concise reports and present scientific concepts and data in an accessible and clear manner for a general audience,” says Todorova.