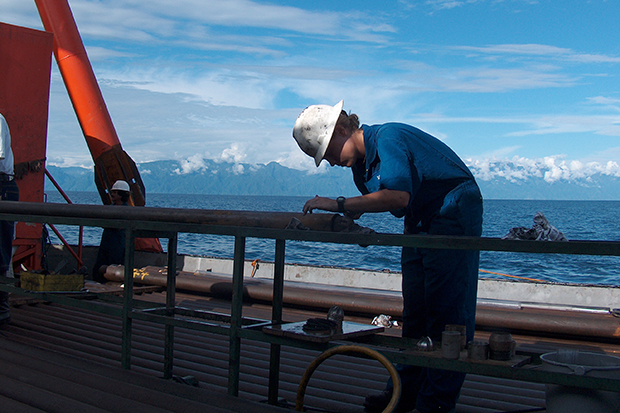 A geological engineer prepares sampling tool for drilling aboard a scientific drilling barge on Lake Malawi. (Photo by Christopher Scholz)

Earth sciences professor Christopher Scholz and former Ph.D. student Robert Lyons have an unprecedented glimpse into the past of a lake with explosive biodiversity. Along with colleagues from six other universities, Scholz and Lyons have unearthed a 380-meter-deep time capsule from Lake Malawi.

Lyons says the core shows that “East African moisture history over the last 1.3 million years is a lot more complicated than was previously postulated.”

The team’s observed variation in lake level also gives an explanation for the lake’s unrivaled diversity of fishes. The lake hosts about 1,000 unique species of brightly colored fish called cichlids, some of which you may have seen in a home aquarium. “The cichlids had to deal with repeated changes in lake level. We think this environmental forcing had a big impact on speciation and diversification of these fish,” Scholz says.

Bordered by Malawi, Mozambique and Tanzania, Lake Malawi is roughly the size of two Lake Ontarios and, at 700 meters, is deeper than One World Trade Center is tall. Because of the lake’s great depth and local climate conditions the lake is stratified into an upper, oxygenated portion, and a lower, oxygen-deprived zone, much like Central New York’s Green Lakes, though for different climatic and chemical reasons. 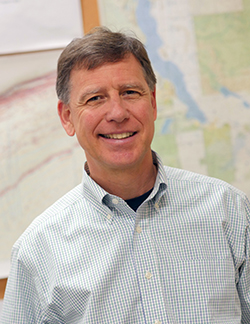 According to data from the core, at various points throughout its history, the lake has cycled down to less than half its current 700-meter depth. During these times, a significant portion of the lake was not covered with water, but in grasslands or even deserts. “There were times when we had two distinct water bodies, which would have further promoted geographic separation of groups of fish and enhanced the generation of new species,” Scholz says.

Scholz and colleagues were able to determine past lake levels by looking for sediment traits associated with modern-day shallow lakes in the Rift Valley. Shallower lakes don’t have Lake Malawi’s characteristic two layers; rather, oxygen is found all the way to the lake bottom. The lack of oxygen in the lower level of today’s Lake Malawi means that carbon-rich remains of life that settle to the lake bottom won’t be as broken down as they would in the presence of oxygen. By looking at how well preserved carbon debris is in different depths of the core, the researchers can determine whether lake levels in the past were deep enough for two or just one layer. This data is reinforced by other measurements of the sediment’s chemical makeup, indicating when tiny invertebrates were living at the lake bottom and leaving behind traces of calcium carbonate.

Turning the hundreds of meters of deep core into a timeline required a collection of clever methods from the paper’s many collaborators. Top levels of the core were dated with radiocarbon dating, the tool commonly used to date fossils. For deeper layers, however, the team turned to signals from volcanoes and the Earth’s changing magnetic field. The team connected layers of ash to eruptions of known dates from a local volcano—or in one case, shards of microscopic glass thrown all the way from Indonesia from one of the largest eruptions the world has experienced. The deepest layers of the core were assigned dates by comparing known changes in the Earth’s magnetic field to the observed magnetic field in samples of the core.

In addition to changes in the depth of the lake, the lake’s shoreline also had a varied history, Scholz explains. Seismic data of the current lake bottom shows that different depths are more rocky, sandy or a mix of sand and mud. As the water level changed, these different areas would be exposed. Because fish tend to live in the upper parts of the lake and often near its edges, changing shorelines would lead to repeatedly changing environments for Lake Malawi’s fish. This in turn provided pressure on the fish to adapt to local conditions—a key component in the development of new species.

The core has yet more information to offer. Lyons says, “This paper will pave the way for future publications from collaborators on the project. It provides a foundational data set for other researchers to build upon.”

Scholz, Lyons and their collaborators’ paper detailing Lake Malawi’s changing levels will be published in PNAS.