Living in the Material World

Understanding the mechanics of cell biology, such as how cells move and form organized structures, has long interested scientists. Addressing these issues by thinking of biological structures as materials may shed light on topics as diverse as how cancer cells move throughout the body or why the brain has ridges. 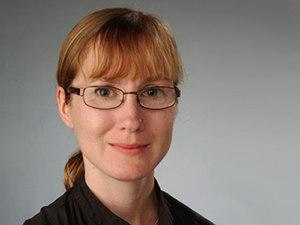 Jennifer Schwarz, assistant professor of physics in the College of Arts and Sciences, is developing new insights into biological structure, thanks to a $315,000 grant award from the National Science Foundation (NSF). She is using the three-year award to study the organization of an internal “skeleton” of cells and how its structure affects the overall mechanics of cells and larger biological structures, as well as the physical organization of nonliving systems.

Schwarz’s work focuses on rigidity transition in nonliving systems. Rigidity occurs when particles in a fluid, flowing substance become so tightly packed that they form a solid. For example, in a partially filled jar of pennies, coins may slosh around when shaken. But if more coins are packed into the jar, the mass of pennies will become rigid and no longer freely flow.

Schwarz studies this transition process to understand how a solid collection of randomly packed particles can return to a fluid, with the deletion of only one particle. Such understanding may help predict characteristics of nonliving systems, such as how sand avalanches occur.

Her grant project also seeks to understand how the principles of rigidity extend into biological systems. “Understanding the mechanics of these disordered systems, whether they are inside a cell or brain tissue, and how these systems are organized could have interesting implications,” she says.

Cell movement is ripe for investigations into rigidity. Cells are more than stationary “bags of water,” Schwarz says. In fact, cells use interior filamentous supports, collectively known as a cytoskeleton, to maintain their shape. 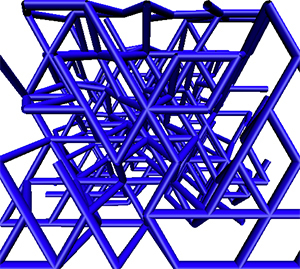 A digital rendering of a filament network

“All of these filaments can intermingle and connect—you can think of it as a little erector set structure in a cell,” she says. Cell filaments then undergo dynamic remodeling to acquire and lose rigidity to enable movement. Existing filaments at the front end of a moving cell can send off small branches of new filament to inch the entire cell forward. Cancer cells use this type of movement to spread themselves throughout the host’s body, making this line of inquiry particularly important.

Schwarz also plans to investigate the mechanics of complex organs such as the brain. Brain tissue is composed of different cell types, including neurons and support cells called glial cells. Glial cells have an interesting trait—when compressed, they stiffen. Schwarz says this is opposite to the intuitive expectation that applying force to the many tiny filaments would make them buckle, making the cell more squishy. She hopes to figure out what explains the stiffness of glial cells, as well as the mechanics underlying why the brain is grooved in general.

Schwarz will employ computer modeling to investigate these complex biological questions in a more tractable way. By controlling physical influences on theoretical systems, she will be able to get down to the basics of how rigidity arises and is maintained in living systems, and how rigid structures respond to external pressures. This approach would enable her to systematically study the role of different forces that contribute to rigidity, such as friction, which would be impossible to avoid in a physical system.

This grant award follows Schwarz’s receipt of a 2007 NSF CAREER award, which recognized her exemplary research and teaching record. She has been a member of the physics department since 2005.

Physics Department Does Its Part to Help Make Masks

Faculty, staff and students from the Department of Physics in the College of Arts and Sciences are using their free time to brush up on their sewing skills and help check the spread of COVID-19. Members of the department are…

European lawmakers are considering new regulations that would push manufacturers to design products that last longer. It’s part of a global effort to curb “throwaway” culture where people buy products, use them for a short while and then throw them…

Pi Day will be celebrated on March 14—3.14. Pi (Greek letter “π”) is the symbol used in mathematics to represent a constant—the ratio of the circumference of a circle to its diameter—which is approximately 3.14159. Graham Leuschke, professor of mathematics…

For years, scientists have been interested in the potential of hydrogels in biomedical and engineering applications. Hydrogels often contain more than 90 percent water and a small percentage of synthetic polymer and are used in a variety of uses from…

3.14 Is A Great Day To Get Silly And Goof Around With Math

Pi Day will be celebrated on March 14. Pi (Greek letter “π”) is the symbol used in mathematics to represent a constant — the ratio of the circumference of a circle to its diameter — which is approximately 3.14159. Graham…