The University will participate in the White House American Campuses Act on Climate day of action on  Thursday, Nov. 19. The White House is launching the American Campuses Act on Climate day of action to amplify the voice of college students across the country in support of a strong climate agreement in Paris that sets the world on the path toward a low-carbon, sustainable future. The multi-layered day-of-action will include a roundtable with campus and business leaders, White House officials and celebrities to highlight best practices to promote sustainability and address climate change on college campuses. 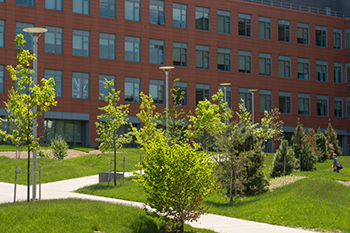 The Climate Change Garden, outside the Life Sciences Complex, is designed to educate students on the impact of climate change.

An interactive, live-streamed conversation between 1-3 p.m. with college students will facilitate a meaningful dialogue to energize young people to achieve ambitious climate goals on their campuses and push for increased global action.

The University’s initiatives to promote sustainability began with a concerted effort to increase campus energy efficiency over 40 years ago. SU was an early signatory of the American College and University Presidents’ Climate Commitment (ACUPCC) in 2007 and ever since has actively pursued  the parallel goals of carbon neutrality and integration of sustainability into the curriculum and research.

A virtual watch party will take place, as this event will be streaming live. The White House organizers will release details regarding the time and logistics late Wednesday. For latest information, check http://sustainability.syr.edu. The campus community may send information, via social media using the hashtag #ActOnClimate I @FactsOnClimate and @SustainableSU, to showcase how Syracuse University is addressing best practices to promote sustainability and climate change awareness on campus, such as, carbon emission reductions, sustainability education and climate resiliency.

If you would like to participate or for further information, contact the Office of Vice President for Sustainability Initiatives, sustinit@syr.edu or JoAnne Race, jrace@syr.edu, 443-5506.