Professor of Biology Scott Pitnick has an infectious enthusiasm for biology. “I was always obsessed with animal behavior and insects,” he explains. 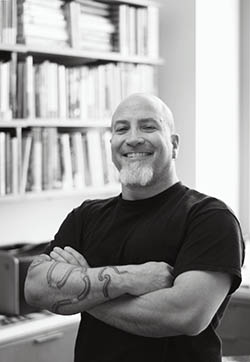 His long-standing love for life science has led to a soon-to-be-published paper with 19 undergraduate coauthors, as well as his appointment as the inaugural Weeden Professor at Syracuse University.

The professorship is named after SU alum Morris Skiff Weeden ’41 and his wife, Jane, whose generosity made this professorship possible.

“Professor Pitnick is a world-renowned evolutionary biologist. His appointment as the inaugural Weeden Professor recognizes the impact his research has had in this area. We are thrilled that he was chosen for this recognition,” says biology department chair and professor Ramesh Raina. “We are fortunate to have him on faculty.”

“There’s nothing like getting moral support from your family, and that’s what this feels like,” says Pitnick about his recent appointment.

Pitnick says of his new role, “There’s a certain bar that’s been raised that makes me want to live up to the honor. It motivates me to think bigger, beyond just my laboratory, but about my role at the University, and to engage in bigger science.”

Animal behavior has long been an interest of Pitnick’s. “My parents were big city,” he explains, “I grew up as a black sheep of the family, because all I was interested in were insects.” He describes himself as one of the lucky few who are able to parlay a lifelong passion into a career.

Pitnick’s research today takes a peek into the sex lives, and sex organs, of insects. He notes that as an evolutionary biologist his “job description” is to explain the diversity of life. As such, turning to the incredibly diverse world of sperm was a clear choice.

There’s more to sperm than the wriggly, tadpole-like cells in humans. Sperm from other animals can be very long, even over an inch, as compared to human sperm, which measure 1/500th of an inch. Sperm from other animals might have multiple tails, or no tails at all. Pitnick explains, “Sperm are the most variable, rapidly evolving cell type there is and when I look at that variation I want to explain it. That gets me excited.”

One of Pitnick’s professional goals is to bring his enthusiasm about biodiversity to his students. Since arriving at the University in 1996, he has mentored over 50 undergraduates in his research lab. “There’s never been a time in my career that they didn’t play a substantive role in the lab,” Pitnick says.

Teaching a course in animal behavior is another outlet for Pitnick to bring biology to undergraduate students. The class, co-designed by Pitnick and former biology professor J. Albert Uy, aims to introduce students to what it’s really like to “do biology.”

“Faculty members all get contacted by a lot of smart, motivated students, but there just aren’t enough opportunities for them to do independent research in the department,” Pitnick says, explaining a motivator for the class’s immersive design.

Students begin by exploring the woods and pond at Pitnick’s home in Manlius, searching for project ideas in a very hands-on way. Current teaching assistant and Ph.D. candidate in the Pitnick lab Brian Gress explains, “We’re not handing the students a project, we’re all out looking together and asking questions together.”

Pitnick says, “We try to take the mystery out of research so they realize that anyone can go out in their backyard and see animals, especially insects, doing interesting things, or curious things, that you can ask about.”

“Right now we have stink bugs in the lab and spiders with lots of spiderlings in their webs; last year we had praying mantises. It’s very fun to have all this diversity of science going on every fall,” Pitnick says, identifying the animal players in some of the students’ projects.

Demystifying science has yielded great results. Notably, Pitnick and Gress coauthored a manuscript with 19 undergraduate students from the animal behavior class. This brings the total number of undergrads that Pitnick has coauthored papers with up to 33. The paper will be published soon in the British journal Behaviour. The new paper is the second publication to spring from the class. Both articles have relied on data gathered by undergraduate students during class projects.

Aside from giving the students a leg up on graduate school applications, Pitnick points to an additional benefit of authorship to the students—“The students got to see that the science they were doing actually is science.”

Gress adds, “They were very excited to be participating in a study where Scott and I didn’t know what the end result was going to be.” 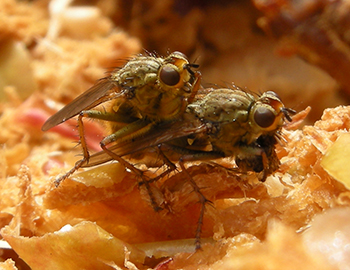 A very small male, which wouldn’t have much luck on a dung pat, finds a mate on apple pulp. Photo by Scott Pitnick

The end result uncovered details of an unusual mating behavior in the yellow dung fly. Yellow dung flies are aggressive predators, or as Pitnick describes them, “the Bengal tigers” of the cow pat, where they mate and lay their eggs. This aggression extends to mating behavior, where large males elbow out smaller ones as they all try to meet a mate on the cow patty.

Both papers published in conjunction with the class show that contrary to over 50 years of research on this fly’s well-studied mating system, sometimes the little guy has more luck finding mates. The trick is in where the flies look. In addition to mating on dung pats, flies need to find sources of protein and sugar. Fresh-pressed apple pulp, a byproduct of cider making and feeding supplement for cows, turns out to be an excellent source of fly nutrition. What’s more, the scientists found that small males on this unique resource, males even smaller than the females themselves, are better at pairing up than the usually successful large males.

Describing the first time he encountered this small male mating advantage Pitnick says, “It’s one of those aha moments where I thought, ‘Wow, this shouldn’t be happening. There’s something really unusual going on.’”

Pitnick’s commitment to undergraduate education and mentorship is well recognized by his colleagues. “He exposes uninitiated undergrads to some of the weird and wild organisms that are out there, right under their noses, whether it’s bombardier beetles that set off explosions in their butts, or fruit flies that dance and sing a courtship song before mating,” says biology professor John Belote, explaining how Pitnick gets undergraduates hooked on biology.

Pitnick says, “It’s exciting to see them get caught up in the research.”