Memory Is All in the Wrinkles. Or Is It?

When it comes to brains, wrinkly is good for the memory. Or so conventional wisdom holds. Certain human genetic conditions can lead to a smooth brain, without any of the normal grooves—something that tends to come with decreasing mental capacity. That many animals have naturally wrinkle-free brains but are still able to learn complex tasks suggests wrinkles aren’t all there is to intelligence. 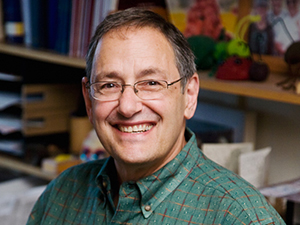 “We don’t know if smooth brains necessarily mean retardation,” says Paul Gold, a biology professor in the  College of Arts and Sciences. An expert in aging, as well as learning, memory and plasticity, he says there are documented cases of people born with smooth brains with above-average IQs. These observations suggest that there’s more to the story than just smoothness.

Gold has been awarded a grant from the Research Foundation of State University of New York to investigate the way brain anatomy influences mental function at a fine scale. He will collaborate with Huaiyu Hu, associate professor of neuroscience and physiology at SUNY Upstate Medical University, to study the impact of neuron morphology on learning and memory in mice, which naturally have smooth brains.

Central to their project—and Hu’s own research—is a type of muscular dystrophy called dystroglycanopathy, which leads to smooth brains in humans. With this disorder, improperly formed structures on the outside of cells prevent the latter from making physical contact with other objects. Poor cell connections can lead to not only smooth brains, but also changes in the way neurons connect to one another, mental retardation and other phenomena.

Even though dystroglycanopathy causes both smooth brains and reduced mental abilities, Hu and Gold question whether or not overall brain structure leads to mental impairments. Using naturally smooth-brained mice, they intend to focus on the effect of neuron connections on mental abilities. “Not being able to make and break connections between neurons is the real issue,” Gold says, underscoring the study’s objective.

Gold and Hu bring considerable expertise in behavioral testing and brain anatomy, respectively, to the project, as they look for connections between neuron structure and learning and memory. They also will take advantage of mice missing a critical gene, resulting in dystroglycanopathy. Hu will compare the fine structure of neurons in gene-deficient mice to those that have received gene therapy to replace the missing genetic information. After neuron structure differences are established between the groups, Gold will test their learning and memory.

Testing for mental deficiencies in mice with dystroglycanopy is relatively new to Gold, who, along with Donna Korol, associate professor of biology, investigates factors such as stress, aging and neurological disease on memory. His and Korol’s research is aided by a team of postdoctoral researchers, graduate students and undergraduates (more than 20 of them), resulting in a lab that crackles with activity.

As for his latest collaboration, Gold is excited about working with Hu, and embarking on a new challenge. “It’s a really novel way to think about the world, and I appreciate that,” he says, regarding his study of dystroglycanopathy. “I also think it’s a way for both institutions to enhance their research programs.”