Shekhar Garde, dean of engineering in the Department of Chemical and Biological Engineering at Rensselaer Polytechnic Institute (RPI), will speak on “Water Near Proteins and Interfaces: A New Molecular Perspective” on Friday, Oct. 30, at 1 p.m. in 105 Link Hall. The event is the Fall Distinguished Lecture for the biomedical and chemical engineering department in the College of Engineering and Computer Science. 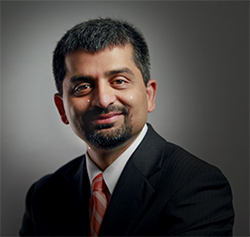 Garde is also the Elaine S. and Jack S. Parker Chaired Professor at Rensselaer Polytechnic Institute. He received bachelors (U. Bombay, 1992) and Ph.D. (U. Delaware, 1997) degrees in chemical engineering and was a director’s fellow at Los Alamos National Laboratory (1997-99) before joining RPI in 1999. His research focuses on understanding the role of water in biological interactions.

Garde has published more than 90 papers and presented 135 invited talks at leading universities and conferences. He won the NSF CAREER Award (2001), Rensselaer Early Career Award (2004), and was the 2011 Robert W. Vaughan Lecturer at CalTech. He is a fellow of the American Institute of Medical and Biological Engineers (2014) and of the American Association for the Advancement of Science (2015).

Garde co-leads the award-winning Molecularium Project, which has produced digital dome and IMAX movies and a web-based gaming portal for children. In 2011, Garde was honored with the Explore * Discover * Imagine Award by the Children’s Museum of Science and Technology, in the Capital District, New York.

On his lecture, Garde says, “Water—the solvent of life—plays an important role in biological assembly and organization. Folding of proteins, formation of micelles and membranes, and molecular recognition in biological systems are all ‘water-mediated’ processes, in which molecular structure and organization of water can drive thermodynamics and guide the mechanics of assembly. However, understanding the molecular details of mediation of biological interactions by water has remained a significant challenge. Here I will focus on one central piece of this challenge, namely that of characterizing the hydration of chemically heterogeneous nanoscale interfaces of proteins from a molecular perspective.

“Our new perspective using theory and atomistic simulations connects the molecular behavior of water—specifically, its nanoscale density fluctuations—to hydrophobicity or philicity of complex interfaces, and in turn, their water-mediated interactions. This new view has enabled mapping of surfaces of complex proteins from the hydration and interactions perspective. It has also revealed new aspects of biological interactions, such as the context dependence of solvation and interactions, and the role of hydration in biological function. This approach, when extended to study solvation near extended hydrophobic interfaces, such as the air-water interface, shows how water-mediated interactions between hydrophobic solutes or between ions, and the corresponding self-assembly, and aggregation phenomena at interfaces can be dramatically different from those in the bulk, suggesting soft air-water interfaces as a platform for new types of assembly.”