Plants Cope with Climate Change at the Gene Level

Climate change can influence everything from pine beetle outbreaks in the Rocky Mountains to rising sea levels in Papua New Guinea. In the face of a rapidly changing earth, plants and animals are forced to quickly deal with new challenges if they hope to survive. According to a recent paper by Jason Fridley, associate professor of biology in the College of Arts and Sciences, recently minted SU Ph.D. Catherine Ravenscroft and University of Liverpool professor Raj Whitlock, some species may be able to handle environmental changes better than others. 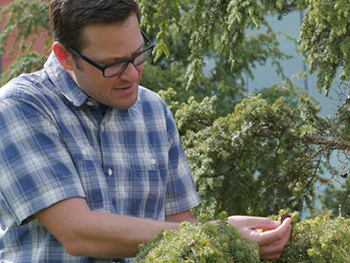 Fridley explains that species have a couple of options to deal with stress associated with environmental change: they can pick up and move to more favorable areas, or they can stick it out and adapt to the new challenges. This ability to adapt to climate changes was the main focus of the researchers’ study

Ribwort plantain and sheep fescue, two plants common in the study site, show signs of being able to respond to induced climate challenges. “There is evidence of genetic differentiation with a long term climate treatment,” says Ravenscroft, explaining that genetic differences have built up between climate-treated versus untreated plants in the study site.

What’s more, the gene-level changes have happened remarkably fast. Because these grasses are perennial species, meaning they live and reproduce for multiple growing seasons, Fridley estimates there have only been around 10 generations of plants over the 15-year experiment. While that may sound like a lot of generations if you think back to your great-great-great-great-great-great-great-great-grandparent, genetic splits happen on an evolutionary timescale—think in terms of hundreds or thousands of years.

Patterns of differentiation and the rapid genetic changes suggest that both species started with a pool of genetic variation. Standing genetic diversity offered the plant populations resilience to a rapidly changing world. This result illustrates that pre-existing genetic variation can benefit plants in light of imposed climate challenges. “It reinforces the idea that diversity supports resilience in the face of climate change,” Ravenscroft explains, but she is quick to point out that not all species may be so lucky.

The plants’ capacity to respond to challenges may point to their future persistence in the study’s ecosystem. “Eventually species are going to show up that are more drought adapted and push the system in a new direction, unless some species, like the plants used in the experiment, have drought-adapted physical traits,” Fridley explains, adding that this is a process that occurs across the globe in response to climate change.

This climate change research was conducted in the English countryside at a long-term ecological research site. More than 15 years ago, a group of British scientists set up the experiment to uncover the effects of climate change by artificially controlling temperature and water availability across many 3×3-foot plots of land. An international team has maintained the research area, located on a previous munitions storage site from World War II, since the experiment’s initiation.

Speaking to the unusually long length of the experimental site Fridley says, “there’s nothing else like it in the world.”

The original article was published in Global Change Biology and can be viewed here.