The Knight Foundation Prototype Fund has recognized the work of a School of Information Studies (iSchool) faculty member and several classes of his students in creating a system to help a refugee population use mobile phones to more easily communicate regarding their community needs. 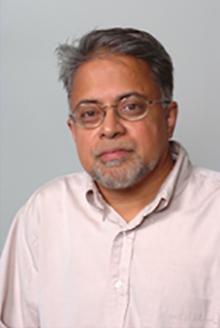 The $35,000 Media Innovation Award will help advance the next development phases of SpeakEZ, a project led by Associate Professor Murali Venkatesh. The Knight Foundation Prototype Fund grant will help bring a project to implementation that Venkatesh has been leading since 2013, developed with the research help of students from successive years of his “Technology as Public Good” classes.

Designed from an open source interactive voice response platform (IVR) that is activated through mobile phones, the system was specifically designed initially to help the sizeable Burmese Karen population in Syracuse. Textual illiteracy is an issue. SpeakEZ is designed to assist them by facilitating one-stop access to resources and services necessary for successful resettlement.

The research project is based out of the Center for Convergence and Emerging Network Technologies (CCENT) Lab at the iSchool. Assisting in the prototype and testing are project team members and graduate students Sagar Dherai, Aakash Mody, Nicholas Lehrman and Ethan Glustoff. The project technical lead in CCENT is iSchool Assistant Professor of Practice Bahram Attaie.

The project began in Spring of 2013 when Venkatesh and his class completed a survey of the Syracuse Karen community’s technology needs and resources. They discovered that although there was an urgent need for an easy-to-use communication system with community-sourced content and control in that community, there were limitations as to what technologies were suitable. The class found that the Karen population’s English literacy and computer levels were low, and their reading and writing skills were unevenly distributed, and yet mobile phone ownership among Karen individuals was high.

Spring 2014 class students subsequently researched suitable platforms for a cell phone-based system. They recommended Freedom Fone, an open source interactive voice response platform that does not require Internet connection and which is accessed by a simple cell phone.

In spring 2015, Venkatesh’s students conducted a large focus group session to determine how the Karen community wanted to use the IVR system. They discovered that the community desired two-way communication between leaders and community members; from community members to leaders; and from community members to other community members. They found that rather than using mobile phones for everyday communication, text and voice alerts could help the Karen population communicate in important functional ways. Those included receiving voice and text alerts for health check-ups and weather alerts; notifications about the need for rides, requests for translators and voting on community issues. Voice services were useful for helping people who were trying to learn English, and for parents who were attempting to communicate with teachers and their children regarding the children’s homework.

“We have a highly motivated CCENT team. We cannot wait to field-test the prototype with the Karen”, says Venkatesh.

In fall 2016, a limited test of the advanced prototype is planned. In spring 2017, large-scale field tests and refinements are anticipated, and deployment of a full-fledged system is targeted for the fall of 2017.

Venkatesh envisions that the prototype eventually could be developed to serve additional refugee populations that have settled in Syracuse.

More information about the CCENT project is available here.