A Hunger for Knowledge

A chemist in the College of Arts and Sciences has been awarded a major grant extension, enabling him to continue studying a rare genetic disorder known as Prader-Willi Syndrome (PWS). 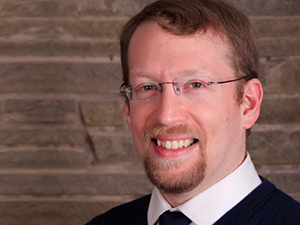 James Hougland, assistant professor of chemistry, has received an additional $76,000 from the Foundation for Prader-Willi Research to build on his previous study of insatiable hunger associated with PWS. He plans to use the extension to investigate biochemical signaling in hunger, in hopes of finding a treatment for PWS.

Hougland says that people afflicted with PWS know all too well the intense desire to eat, independent of how much food they consume. “You know what it’s like to have an itch in the middle of your back that you can’t scratch?” he asks. “Imagine that’s hunger. Even if they eat enough, PWS patients still feel hungry.”

Insatiable hunger in PWS is of particular concern to Hougland because it can lead to morbid obesity. In fact, cardiovascular conditions resulting from obesity have been a source of PWS-associated mortality.

The Hougland Lab focuses on the biochemical pathway underlying hunger signaling. Much of their work involves the “hunger hormone” ghrelin, which is produced by cells in the gastrointestinal tract. Ghrelin then enters the bloodstream and is transported to the hypothalamus in the brain, where it signals hunger. Only when one eats do ghrelin levels drop, thus turning off the impulse to consume more.

With PWS, insatiable hunger results when ghrelin signaling has gone awry: levels remain high and don’t cycle down after eating. One way to tackle this problem, Hougland says, is to stop the manufacture of the mature ghrelin protein.

This is done with an enzyme called ghrelin O-acyltransferase (GOAT). Before ghrelin can tell the brain it is hungry, GOAT tacks on a fatty acid chain to the signaling molecule. Hougland is using his grant award, as well as its extension, to figure out how to inhibit GOAT from adding this fatty acid.

“Because PWS is a genetic syndrome, you can’t cure it, but you can certainly treat the symptoms,” he says. “Even if PWS patients are overproducing ghrelin, we can try to block the enzyme that activates ghrelin. This will cause them to pump out an inactive form of it to blunt the hunger signal.” 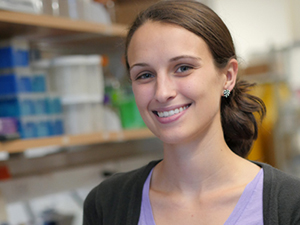 Under the original grant, the Hougland Lab identified a number of molecules that block GOAT from activating ghrelin. Kayleigh McGovern, a Ph.D. candidate in chemistry, recalls screening a library of different molecules for their potential to block GOAT activity. “I was very excited to identify a new inhibitor out of this library screen and to start figuring out which components of the molecule are important for inhibition,” she says.

The PWS grant extension enables the Hougland Lab, along with collaborators at Purdue University, to take the information they have learned about molecules that stop GOAT’s action to create synthetic blockers that work even better. “We’ve moved beyond identifying inhibitors, and are now working on optimizing and creating the next generation of them,” Hougland says.

McGovern looks forward to investigating how GOAT performs the fatty acid transfer to ghrelin under the grant extension. “If we can figure this out, we’ll be better equipped to design inhibitors based on its mechanism,” she says.

McGovern is part of the team studying GOAT signaling, which has included a total of four graduate students and seven undergraduates from the Hougland Lab. “We’re one of the leading groups studying GOAT and ghrelin biochemistry,” Hougland says, adding that the team has built “considerable momentum” with their work. “The grant extension will keep pushing us forward, developing research tools and enhancing the discoveries we’ve made.”