A physicist in the College of Arts and Sciences has been awarded a major grant from the National Institutes of Health (NIH) to develop theoretical models of tissue and organ formation.

The accomplishment comes on the heels of Manning’s receipt of a $168,750 grant award from the Gordon and Betty Moore Foundation and the Research Corp. for Science Advancement to explore untested ideas in physical cell biology.

“Professor Manning brings exceptional energy and depth to her work,” says A. Alan Middleton, professor and chair of physics. “She exemplifies the excellence of both our Condensed Matter Group and the Department of Physics by applying sophisticated theoretical methods and image analysis to experiments on cells, both migrating and in tissues.”

Manning’s NIH award supports her ongoing study of how cell shapes and mechanical interactions influence patterning during embryonic development. In this project, her group will develop a mechanical model for tissues, with input and feedback from experiments performed in Amack’s lab, enabling them to infer the interplay between cell signaling and forces controlling organ development (aka organogenesis). Both research groups will then quantitatively test the model predictions using state-of-the-art molecular biology and image analysis techniques.

Much of their work involves Kupffer’s vesicle (KV), a ciliated organ in a zebrafish embryo that controls left-right patterning. 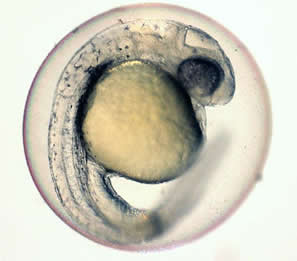 “Very little is known about the mechanical forces and tensions that shape this important organ, which is similar in all vertebrates, including humans,” Manning says. “Our new, dynamic model, in combination with experiments from Jeff’s lab, should allow us to better understand the processes that lead to congenital disease.”

One of Manning’s goals is to test the hypothesis that cell-shape changes needed for KV organogenesis are due to specific mechanical forces inside KV cells, as well as collective forces and signals generated by cells surrounding KV.

“Direct results of this work will include a description of the mechanical and biochemical pathways that lead to KV tissue remodeling and organ function, an understanding of how different perturbations disrupt these pathways, and a new set of mathematical models for tissue dynamics,” Manning adds.