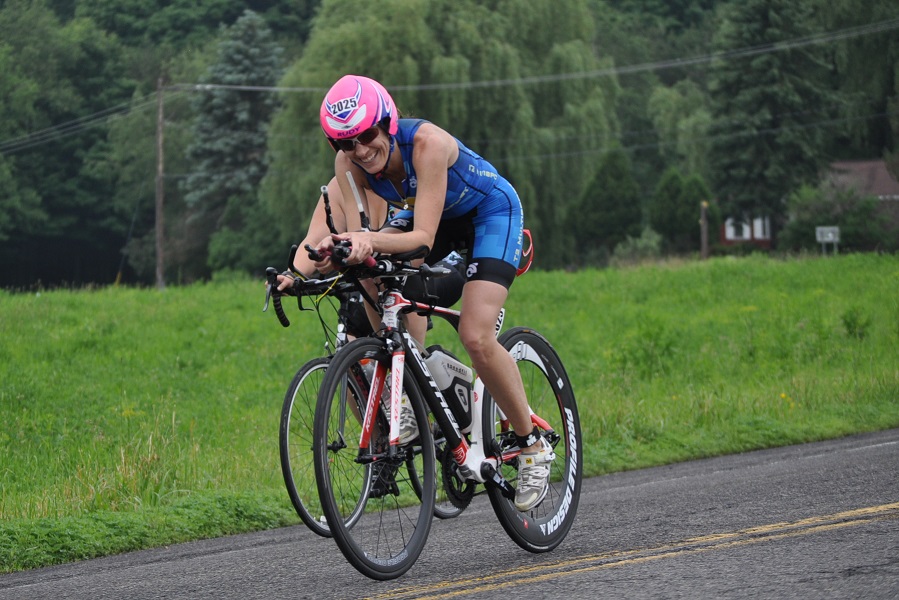 Heather Ketcham puts in many miles on her bike, in the water and on foot to train for Ironman competitions.

On a recent warm morning, before most people are out of bed, Heather Ketcham dives into the cool waters of Cazenovia Lake, not far from her home. Her husband, Michael, paddles nearby in a kayak, and a friendly group of other bold, early morning risers join her in the cool waters.

This isn’t just a refreshing dip; this is her training ground.

Ketcham G’13, coordinator with the University’s Conference Services, is preparing for the Ironman 70.3 World Championship on Aug. 30 in the Austrian alpine town of Zell Am See.

The Iron Girl competition in Syracuse was her first taste of a triathlon six years ago and she’s been hooked ever since. 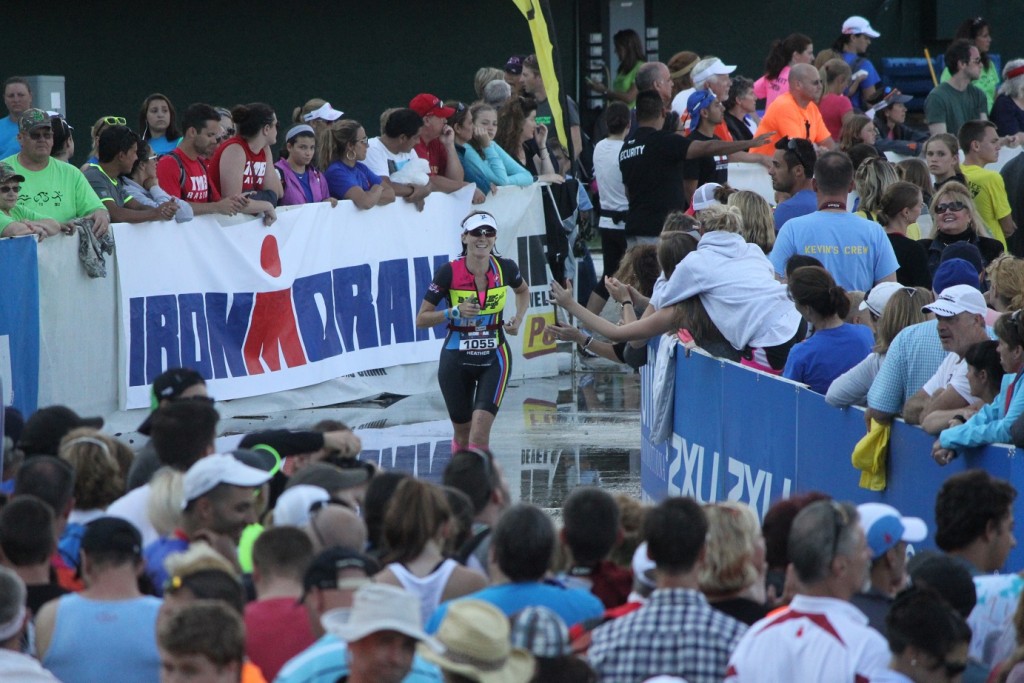 Heather Ketcham finishes the Ironman in Lake Placid in 2014.

“I just got addicted to the sport. I love to swim and I was a swim racer at Le Moyne College [where she graduated from in 1995],” says Ketcham, who earned an M.B.A. at the Whitman School.

“It’s hard work, but the people you’re practicing with and the people who are rooting for you make you feel like you can take it on,” says Ketcham, who is part of the CNY Triathlon Club and the Syracuse University Noontime Runners League. “It’s a wonderful camaraderie. You’re doing an individual sport on race day but during training, you’re riding bikes, meeting up at the lake with other swimmers and running with friends.”

“I don’t ever forget where I started from,” Ketcham says. “You just never know what you’re capable of until you try.”

Last year, Ketcham competed in the Lake Placid Ironman, a 2.4 mile-swim, a 112-mile bike ride and a full marathon, for a total of 140.6 miles. “That was a magical moment coming around the Olympic oval to the finish,” Ketcham says. 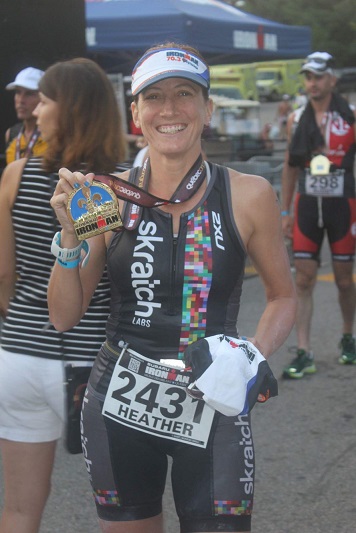 At the recent Mont-Tremblant, Quebec, Ironman, Ketcham competed with 2,350 other athletes, finishing 17th in her division.

After qualifying at Lake Placid, Ketcham and her coach, Kristin Roe of T2 Multisport, decided that she would enter the Mont-Tremblant, Quebec, Ironman on Aug 16 and trained throughout the year. She also competed in the 70.3 in Raleigh, N.C., and the Syracuse 70.3, in which she qualified for world championships.

At the recent Mont-Tremblant race, Ketcham competed with 2,350 other athletes. She completed the competition in 12:02:01, and placed 665th in overall ranking, 17th in her division and 102nd among women.

Although the race in Canada is followed quickly by the world championship, Ketcham was not deterred.

“I’m hoping my body holds up, but I have to go—it’s Austria,” says Ketcham, who has a special tie to the area. Ketcham was born in Frankfurt, Germany, while her father was stationed there during his time in the U.S. Army.

“When I did my first Iron Girl, I never thought that this sport would take me so close to my birthplace—and represent the United States,” Ketcham says. Ketcham and her husband will spend time after the race visiting neighboring Germany and the city of Munich and Frankfurt. “Your life just takes you places that you don’t even expect, but if you step far enough out of the box, you can see how all the pieces come together.”

With her sights set on the worlds, training has been intensive, but her schedule has tapered to rest up for the competitions.

“We work out between 15 to 19 hours a week, swimming, biking and running throughout the week,” Ketcham says. “I’ll swim at the lake early in the morning as the sun comes up or at Archbold Gym during my lunch hour. They know me at the gym and the pool here at SU and cheer me on. I also commute on my bike to work.” 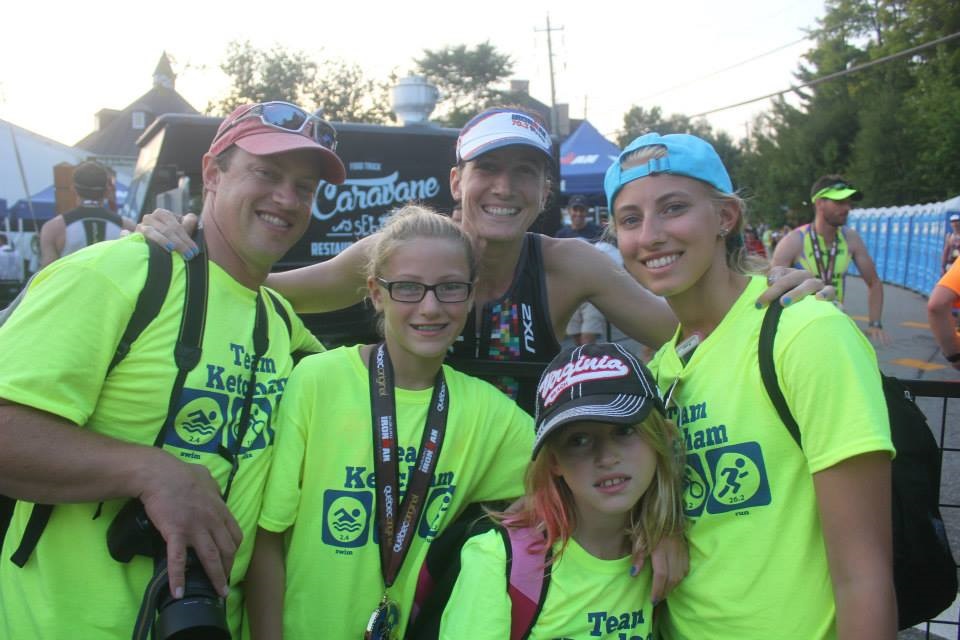 While competing, Ketcham focuses on her family, her siblings and her many close friends. She is joined at the finish of the Mont-Tremblant, Quebec, Ironman, by her husband and daughters.

She works out on the fringes of her day, so it doesn’t impact her family—her biggest fans—daughters Taylor, 16, Julia, 12, and Vivianne, 8.

“It’s very special for my daughters to see me race,” Ketcham says. “They practice in the kid’s club of the CNY Triathlon Club. It gives them a sense of healthy living and teaches them commitment to a sport. And if that means coming in last, that’s OK, because you did your best.”

While competing, Ketcham focuses on her family, her siblings and her many close friends. They all offer their support of her achievements, including encouragement from Syracuse University Women’s Soccer Coach Phil Wheddon—who has helped the United States win gold medals in soccer—to take her abilities to the world championships.

Her sister, Shannon, has attended many a race and along with her support and cheering captures the day as photographer. “It gives me such joy to see her on the course,” Ketcham says.

Her two lucky traditions: she wears two different colored socks and carries a Special Forces coin given to her by her brother, Scott, a Marine veteran and state trooper in Minnesota.

The start of the race can be overwhelming but Ketcham meditates to stay calm and thinks of the words of good friends.

“‘You’ve done all the training, that’s the hard part. If you get too nerved up, you’re going to miss the beauty of it all,’” Ketcham says. “You have to enjoy the moment and take your victory lap.”