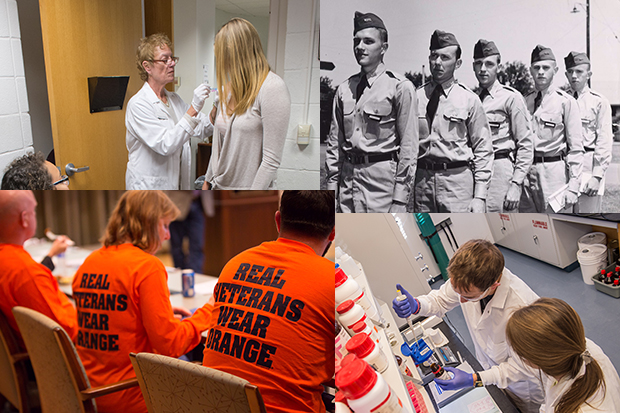 Syracuse has a number of key disciplinary and programmatic strengths—including the IVMF, public health and biomaterials—that hold potential for the University to expand its historic commitment to veterans into the realm of health care.

As described in this morning’s Post-Standard, Syracuse University has begun actively exploring the idea of opening a small interdisciplinary medical school dedicated to serving the needs of the nation’s military veterans and their families. If deemed feasible, it would be the first college of medicine in the nation to support a pipeline for doctors specifically focused on serving and supporting veterans and their families. Graduates would be placed in Veterans Administration hospitals around the country and help provide a share of the 22,000 new doctors the VA indicates it will need in the coming years.

While it is still just an idea, the exploratory effort is in keeping with New York State Gov. Andrew Cuomo’s call for “big ideas” to fuel his Upstate Revitalization Initiative competition. As part of that initiative, the Central New York Regional Economic Development Council has launched its own competition to identify the economic development proposal most likely to have a shot at winning $500 million in state funding at stake under the initiative. The idea for a medical school dedicated to veterans’ needs has already drawn encouragement from state and national leaders, including U.S. Secretary of Veterans Affairs Robert McDonald, who met with Chancellor Kent Syverud and other University leaders recently in Washington, D.C.

The University has a track record of success in funding veteran-related initiatives. In the past five years alone, it has attracted an estimated $55 million from corporate, government, foundation and individual philanthropy to support such initiatives. This funding, often from organizations with no previous ties to the University, has led to a rapid expansion in services and employment at the University focused on veteran-related policy, service and research.

“Our governor has encouraged us to think big and aim high in ideas that will attract jobs, people and ideas to the Central New York region and enhance its contributions to the nation,” says Interim Vice Chancellor and Provost Liz Liddy. “A medical school with this unique niche would build on Syracuse University’s long-standing and growing national leadership role focused on serving veterans and their families, and attract national and global interdisciplinary jobs, investment and resources to the region. It also could help address an urgent need at a time when the critical physician shortage nationwide that disproportionately affects our veterans is only likely to get worse as that population ages.”

If a University-based college of medicine is determined to be feasible, the school would educate doctors specifically to serve the U.S. Department of Veterans Affairs and the national VA hospital system. It also could provide pilot programs for other medical schools and attract national and global interdisciplinary research dollars.

The concept for a veteran-focused medical school would also build on a larger University proposal to develop, within the Central New York region, a cluster of institutions and infrastructure that would function as a national hub for thought leadership, research and programming focused on the multifaceted issues affecting veterans and their families. The physical anchor for the proposed cluster would be a National Veterans Resource Complex, located on the Syracuse University campus, which would house training programs and educational counseling services, and serve as a convening site for local and national veteran-related organizations.

Further study into the idea’s feasibility will be conducted in partnership with faculty from all related disciplines and University supporters. Conversations also will continue with Secretary McDonald and staff of the U.S. Department of Veteran Affairs and other key stakeholders.

While still in the exploratory stages, the idea for a medical school echoes Chancellor Syverud’s call at his inaugural to advance the University as a leader in supporting those who have served the nation in uniform. It also aligns with the University’s new student- and faculty-focused Academic Strategic Plan, which cites the potential for academic opportunities that may not yet have been considered but that tap into the University’s existing strengths. Those opportunities, the plan states, might involve “faculty who teach the core required sciences for a medical degree … partner(ing) with local hospitals in addressing the critical need for skilled physicians” and a potential new program focused on “medical training specifically tailored for the needs of veterans.”

A medical school could seed significant learning and research opportunities for students and faculty across a range of disciplines and programs. Areas of strength relevant to the proposed focus area include the Institute for Veterans and Military Families (IVMF) and schools and programs related to public health, disabilities, aging, speech and hearing, psychology, biology, biomedical engineering, child and family studies, food studies, social work, education, exercise science, design, communications and others.

Such an initiative would also extend the University’s long legacy of responsiveness to the needs of veterans and military-connected communities. Under Chancellor Tolley, the University emerged as a national leader in enrolling World War II veterans under the newly implemented GI Bill, and today it houses several groundbreaking national initiatives, such as the IVMF and the Entrepreneurship Bootcamp for Veterans with Disabilities, that target the unique needs of post-9/11 veterans.

As part of the initial feasibility study, University leaders have spoken with stakeholders both inside and outside the University, including SUNY Chancellor Nancy Zimpher and SUNY Upstate Medical University Interim President Dr. Greg Eastwood. In those conversations, the University emphasized that should the idea be deemed feasible, the medical school would be national in scope and stature and would complement, rather than detract from, the mission of SUNY Upstate Medical University. The University also has already committed to not impacting Upstate’s current level of student residencies at the VA Hospital or Upstate’s overall relationship with the local VA.

Additional updates to the Syracuse University community regarding the status of the idea will be shared in the coming days and weeks.