When it comes to releasing carbon dioxide into the atmosphere, the combustion of fossil fuels is far and away the biggest offender. In fact, the Department of Energy estimates that the process creates approximately 30 billion tons of CO2 every year—approximately 40 percent of all carbon emissions. 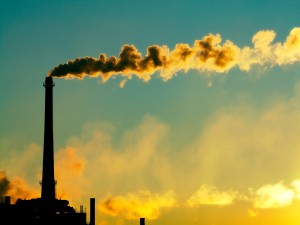 The burning of fossil fuels remains our primary source of energy, so researchers are trying to make the process cleaner.

Given the current limitations on clean, renewable energy technology, such as solar power, and its relatively low implementation, the burning of fossil fuels remains our primary source of energy. If we can’t go without it for the immediate future, we need to do what we can to make the process cleaner. Researchers in the College of Engineering and Computer Science are contributing to the cause.

In Associate Professor of Mechanical and Aerospace Engineering Jeongmin Ahn’s Combustion & Energy Research (COMER) Laboratory, graduate student Ryan Falkenstein-Smith and his fellow researchers are developing a material to facilitate the capture of carbon dioxide at fossil fuel-burning power plants before it can be released into the atmosphere.

In traditional fossil fuel combustion, a chemical reaction takes place between fuel (oil, coal, or natural gas) and air (made up primarily of nitrogen and oxygen). This produces heat, light and useful energy. Molecularly, what’s left is nitrogen, carbon dioxide and water vapor. The material Falkenstein-Smith is developing uses a novel technique to remove nitrogen from the equation. By doing this, the combustion process requires less energy and is more efficient.

Typically, removing nitrogen from air requires the use of an air separation unit. These tend to be energy-hungry devices—the amount of energy they eat up counters any energy savings gained by burning pure oxygen. In the COMER lab, researchers are trying to overcome this obstacle. Their material is a fabricated ceramic that acts as an ionic conductor. The material is molded into hollow fibers. Using a simple chemical gradient, it is able to move oxygen ions through its membrane, while blocking the nitrogen from the combustion process.

The oxygen is fed through the hollow fibers along with the fuel. They ignite and after combustion, carbon dioxide and water vapor are left, which can be frozen and buried, or even put to use, sometimes in something as common as carbonating soda.

There is increasing pressure for industry to reduce carbon dioxide emissions from combustion processes. The fabrication, characterization and experimentation of this material is just one piece of solving that large puzzle, but eventually, it could have a big impact. Falkenstein-Smith is eager to see ideas like his implemented in the near future.

He says, “In the COMER lab, I get to work on projects that could one day make a significant difference in the real world and that’s the reason I wanted to become an engineer. I want to create something with value. I feel that I’m doing that with this research. Carbon capture is a hot topic right now, and it will continue to develop. I imagine that technology like ours will be widespread in 10-20 years. It’s amazing to be a part of a team that is focusing on it so early on.”