A physicist in the College of Arts and Sciences has been awarded a major grant to support his ongoing work in quantum information science. 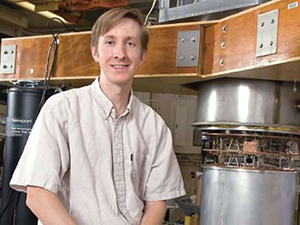 Britton Plourde, associate professor of physics, has received a three-year, $900,000 grant award from the Army Research Office (ARO) for his project “Accurate Qubit Control with Single Flux Quantum Pulses.” His amount is part of a larger grant that has been awarded to colleagues at the University of Wisconsin-Madison and Saarland University (Germany).

“We’re using this award to design an experimental and theoretical program to demonstrate high-fidelity coherent control of a superconducting qubit, using trains of Single Flux Quantum [SFQ] voltage pulses,” says Plourde, an expert in condensed matter physics. “It represents an aggressive first step toward the integration of a quantum processor with cold, classical digital control circuitry based on SFQ logic.”

Plourde hopes to develop a superconductor-based quantum computer, which has the potential to solve certain key problems more efficiently than the most powerful conventional computer. A quantum computer built from superconducting circuits, however, must operate on a dilution refrigerator at temperatures near absolute zero. Otherwise, the presence of thermal energy can destroy quantum states.

The superconducting quantum circuits at the bottom of the refrigerator require numerous microwave cables to connect the low-temperature environment of the circuits with the room-temperature signal generators and conventional computers that control the system. Thus, one of Plourde’s goals is to move a portion of the room-temperature control electronics into the cold region of the refrigerator, next to the superconducting quantum circuits.

“This will significantly reduce the overhead needed for scaling a superconductor-based quantum computer to a large number of circuit elements,” he says.

A Syracuse faculty member since 2005, Plourde has been awarded multiple ARO grants, the most recent of which enabled him to acquire an adiabatic demagnetization refrigerator, useful for characterizing the various circuit elements for his experiments. He also is the recipient of a National Science Foundation CAREER Award and an IBM Faculty Award. Plourde earned a Ph.D. in physics from the University of Illinois at Urbana-Champaign, and is editor-in-chief of Transactions on Applied Superconductivity, published by the Institute of Electrical and Electronics Engineers.

The College of Engineering and Computer Science is honored to announce its inaugural Patrick P. Lee Scholars. The Lee Foundation’s largest scholarship program supports students at institutions of higher learning who are pursuing careers in engineering and other technical fields….