Melissa Pepling, associate professor of biology in the College of Arts and Sciences, has received a major grant award from the National Institutes of Health (NIH) for her ongoing work in ovarian biology. 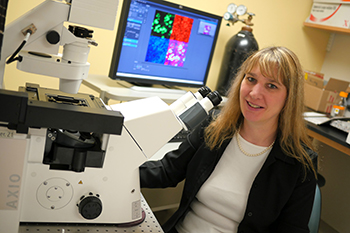 She is the recipient of a three-year, $440,000 award from the NIH’s Academic Research Enhancement Award (AREA) Program. Also known as an AREA R15 award, it is designed to support meritorious research, expose students to laboratory research and strengthen the research environment of the University.

“It’s an exciting time in my field, as clues to the detection and treatment of ovarian cancer and other related conditions are being discovered at a record pace,” says Pepling, who specializes in the study of oocytes (female germ cells), hormone signaling and ovary organ culture. “Ovarian cancer is particularly hard to diagnose because of the lack of symptoms that are unique to the illness. My hope is that we can detect these diseases sooner, thus reducing the high mortality rate among women.”

Also a faculty member of the Syracuse Biomaterials Institute, Pepling says the grant award will support the study of other areas of female fertility, including primary ovarian insufficiency, the reproductive lifespan and menopause. As such, her research utilizes a variety of biomedical research techniques, including immunocytochemistry; confocal microscopy; Western blotting; ovary organ culture; pharmacological inhibitors; small-interfering RNA, or siRNA, technologies; and genetics.

“The pool of primordial follicles present at birth represents the total population of germ cells available to a female during her entire reproductive life,” she explains, adding that these cells undergo incomplete cell divisions that result in clusters called cysts. “My goal is to better understand the mechanisms that regulate cyst breakdown and programmed cell death to establish the primordial follicle pool in the ovary.”

“Professor Pepling is one of the leading authorities on mammalian oogenesis,” says Ramesh Raina, associate professor and chair of biology. “Her lab is doing cutting-edge work with endogenous and exogenous estrogens and how they affect early oocyte development. It’s pushing our department—and embryogenesis, in general—in bold, new directions.”

Pepling holds a variety of other academic and administrative posts, including serving as director of the biology department’s curriculum committee and confocal microscope facility. A sought-after lecturer and contributing journalist, she is a peer reviewer for a number of scholarly publications, including Development, Endocrinology and Nature Genetics.

She earned a Ph.D. from SUNY Stony Brook.