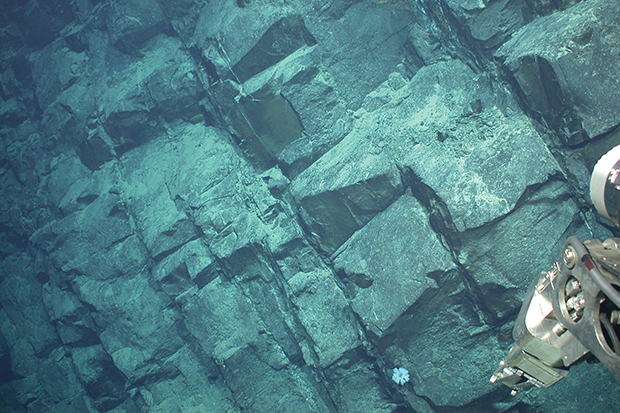 The Pito Deep, a four-mile-deep rift near Easter Island, enables scientists such as Jeff Karson, who supplied the photo, to closely examine the structure and formation of the Earth’s crust.

A professor in the College of Arts and Sciences has published a much-anticipated book on the geology and biology of the oceanic abyss.

Jeff Karson, professor of Earth sciences, is the lead co-author of “Discovering the Deep: A Photographic Atlas of the Seafloor and Ocean Crust” (Cambridge University Press, 2015). The book contains more than 500 original illustrations and color photos, along with a suite of online resources and exclusive videos.

Karson wrote the book with Deborah Kelley, professor of oceanography at the University of Washington; Daniel Fornari, a marine geologist and senior scientist at the Woods Hole Oceanographic Institution (WHOI); Michael Perfit, professor of geological sciences at the University of Florida; and Timothy Shank, an associate scientist in biology at WHOI. 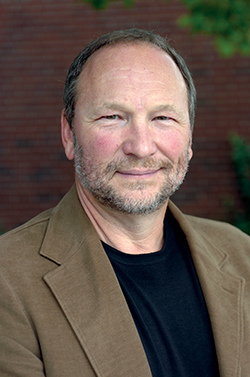 “The deep oceans and global seafloor are Earth’s last frontier,” says Karson, an expert in structural geology and tectonics. “They’ve remain largely unexplored and have great potential for natural resources, biological diversity and insights into how the Earth works.”

Karson says the book will transport the reader to bizarre landscapes, whose exotic life forms rival the “most imaginative science fiction.” Starting with a historical summary of seafloor exploration, “Discovering the Deep” describes the geologic components of the Earth’s oceanic crust and the processes that have created it. Special emphasis is placed on the unusual biological communities that are indigenous to the mid-ocean ridge system.

Hidden by a veil of oceans, the mid-ocean ridge is a continuous chain of volcanoes and rift zones encircling the Earth, much like seams of a baseball. Scientists know that, over geologic time, new oceanic crust has formed among these ridges and, in the process, has repaved the seafloor.

“We delve into considerable detail about the composition and structure of the oceanic crust, as well as hydrothermal vent ecology and chemistry that are unique to the mid-ocean ridge,” Karson says. “This is the first up-to-date, comprehensive view of the mid-ocean ridges and associated seafloor geology and biology.”

Karson says many of the images were captured by human-occupied or robotic vehicles in the still, lightless abyss, utilizing the latest in deep-sea lighting and imaging technology. “The book will be an indispensable resource for students, educators and researchers of marine science,” he adds.

Already, “Discovering the Deep” has drawn praise from colleagues. James Cameron, filmmaker and deep-sea explorer, calls it a “must-own for anyone in the ocean sciences and for those simply curious” about the Earth’s final frontier. Robert Ballard, founder and president of the Ocean Exploration Trust, describes the book as “beautifully illustrated and comprehensive,” evoking comparisons to Bruce Heezen and Charles Hollister’s now-classic “The Face of the Deep” (Oxford University Press, 1972). Kathryn Sullivan, a distinguished scientist and former astronaut, lauds “Discovering the Deep” as an “exquisite synthesis of the complexity of natural processes.” 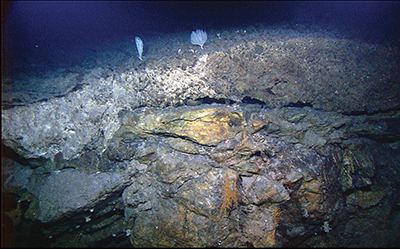 A crustal shear zone on the floor of the Atlantic Ocean, part of the longest mountain range in the world (Photo courtesy of Jeff Karson)

“We’ve used high-tech, deep-sea technology to capture the seafloor like never before,” says Karson, adding that the book symbolizes the importance the authors and their respective institutions place on fundamental scientific research. “The deep seafloor makes up nearly two-thirds of the Earth’s surface, but we’ve only begun to understand how the crust beneath it forms and what it can teach us about our fascinating planet.”

Karson came to Syracuse in 2006, after spending two decades as professor and chair of the Department of Earth & Ocean Sciences at Duke University. Building on his research of the geology of the deep sea floor, he has investigated subaerial geological phenomena that are analogous to mid-ocean ridge volcanism and faulting. As such, his travels have taken him to Iceland, East Africa and other remote areas containing ancient oceanic rock formations known as “ophiolites.”

Along with Robert Wysocki, an assistant professor of art in the College of Visual and Performing Arts, Karson is founder of the Syracuse University Lava Project, which creates natural-scale lava flows for scientific experiments, educational demonstrations and artistic creations.