By investigating uncomfortable temperatures in Maxwell Hall, four students in the College of Engineering and Computer Science have helped reduce the building’s overall energy usage, pollution and cost of heating. Their efforts have provided Maxwell’s occupants with a cozier environment and have created an estimated savings of more than $12,000 a year and 525,000 pounds of steam for the University. 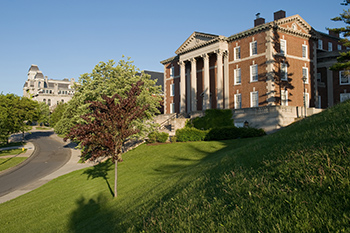 Students Enrica Galasso ’15, Jillian Burgoyne ’14, Ryan Milcarek ’14, and Mark Seibel ’15 took aim at the problem after gathering tips from the University’s Energy Systems and Sustainability Management group about buildings on campus that felt cool or overheated to occupants. The team weighed their options and ultimately decided that they could have the biggest impact in Maxwell.

Using data loggers to measure the temperatures of different spaces over time, the team honed in on multiple steam radiators that were performing improperly. Then, with a thermal imaging camera and an ultrasonic leak detector, the team identified faulty steam traps as the likely cause of the malfunctioning heaters.

The team turned their research over to Emily Greeno, energy conservation manager for the University. Greeno says, “Upon receiving the student report, the University brought in a third party to perform a steam trap survey within Maxwell, utilizing incentives available from National Grid. The survey found that 21.7 percent of the traps were found to be defective and have since been replaced. The replacement of these traps, which the students helped to identify, is estimated to save 526,822 pounds of steam and $12,900 annually.”

Their project, “Green Heating: Reducing Overheating and Pollution on Campus,” led to prompt repairs of the heating system in Maxwell. It was also awarded first place in the graduate student category at the 2014 Earth Day Event and Student Competition Exhibition held at R.I.T. for developing an innovative solution that benefits the environment on a campus.

The team works together in the Syracuse Industrial Assessment Center (IAC), a group funded by the Department of Energy that helps manufacturing facilities decrease energy usage and increase efficiency through no-cost energy audits.

The success of this project is a prime example of engineering solutions producing tangible social, environmental and financial benefits. The students were interested to learn more about the steam system that heats the campus and were proud to put their knowledge to use to improve it.

“I enjoyed being able to do my part to improve the campus,” says senior mechanical engineering student Seibel. “I was thrilled that it was something we could experience and that it actually has made an impact. Through the IAC, we do things all the time outside of Syracuse, and it was neat to be able to do something that affected our own campus that we could point to and say, ‘We did that.’”