The Department of Mathematics in the College of Arts and Sciences has the formula for success. 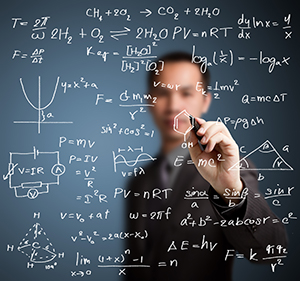 Nearly a third of the mathematics faculty have received major grants or had international speaking invitations in recent months.

Uday Banerjee, professor and chair of mathematics, says that nearly a third of his faculty have received major grant awards or international speaking invitations in the past few months.

“I am extremely proud of our mathematicians,” says Banerjee, who recently gave a keynote address at the 11th World Congress on Computational Mechanics in Barcelona. “They are inspired teachers, brilliant scholars and engaged citizens who are committed to the long-term success of the department. In the college, faculty success and student success go hand in hand.”

Their achievements are as follows:

Professor Dan Zacharia is the inaugural Douglas R. Anderson Faculty Scholar. Funded by an anonymous gift, the two-year award is named for the professor emeritus and former chair of the department. Zacharia is using the award to support ongoing study of representations of algebras. It also will help with conference travel and bringing guest speakers to campus, he says.

Metric spaces are abstract sets with a notion of measurable distance between any two points. Kovalev says that because metric spaces are an essential part of data visualization and analysis applications, they have numerous applications in computer science, machine learning, genetics and statistics.

“The notion of distance is fundamental to our perception of the physical space around us and to our idealization of this space in geometry,” he adds. “The distillation of the most salient properties of distance leads to the concept of metric space.”

Lanzani is interested in techniques involving the interplay of complex and harmonic analysis. “Along with partial differential equations, these disciplines are important to pure and applied science,” she says. “They contribute to our understanding of such basic phenomena as heat transfer and celestial mechanics.”

Professor Evgeny Poletsky is the recipient of a Simons Foundation Collaboration Grant for Mathematicians. He will use the grant award for overseas collaboration and travel as part of his work in complex analysis and invariant metrics. Poletsky recently gave a plenary lecture at the Conference on Constructive Approximation of Functions at the Stefan Banach International Mathematical Center in Warsaw.

Professor Dan Coman has also been on the overseas circuit, lecturing in China at the Tsinghua Sanya International Mathematics Forum (TSIMF) and the Institute of Mathematics of the Chinese Academy of Science in Beijing. He also spoke on complex analysis at the University of Cologne.

Professor Graham Leuschke gave four one-hour lectures at the International Conference on Representations of Algebras at the TSIMF, as well as an invited talk at the American Mathematical Society (AMS)’s Sectional Meeting at Texas Tech University. An expert in commutative algebra, he chairs the AMS Committee on Meetings and Conferences.

Associate Professor Lixin Shen was invited to speak at the International Conference on Computational Harmonic Analysis at Vanderbilt University. His lecture addressed models and algorithms for one-bit compressive sensing models, prevalent in science, engineering and pure mathematics. He also delivered a plenary lecture on signal/image processing at the International Workshop on Theoretical and Computational Analyses for Inverse Problems at Sun Yat-sen University in Guangzhou (China).

Assistant Professor William Wylie recently spoke at the winter meeting of the Canadian Mathematical Society in Hamilton, Ontario, and at a mini-workshop at the Mathematisches Forschungsinstitut Oberwolfach, an international research center in the German Black Forest. Much of his work involves differential geometry (e.g., Einstein metrics, Ricci solitons, and Ricci flow under symmetry assumptions).