Liddy Offers Academic Strategic Plan Update: Where Are We Now, and What’s Next?

On Wednesday, Feb. 25, Interim Provost and Vice Chancellor Liz Liddy will convene a “Day of Conversation” to share key findings and preliminary recommendations that have emerged from a campus-wide effort to develop an Academic Strategic Plan as part of the Fast Forward Syracuse initiative. 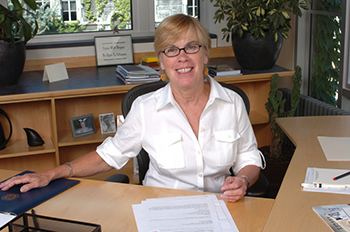 Liz Liddy will convene a “Day of Conversation” to talk about the Academic Strategic Plan.

Over the course of the day, students, faculty and staff will have a chance to learn about—and offer input on—the Academic Strategic Plan Steering Committee’s progress toward formulating a final plan. The Steering Committee, which Liddy chairs, and its seven Working Groups have solicited campus input through multiple channels over the last six months, including open forums, surveys, focus groups and interviews. Wednesday’s event will showcase findings and recommendations emerging from the Working Groups’ deliberations.

Presentations are at noon, 3 and 6 p.m. in Schine Center’s Goldstein Auditorium. Each will open with a short overview of the process to date and then brief presentations by each of the Working Groups. Informal breakout sessions will follow, during which interested attendees can chat with Working Group members and offer feedback on their findings.

In advance of that event, and in a desire to update the campus community on some of the more logistical concerns relating to the Steering Committee’s work, Liddy recently sat down with SU Today to answer questions about the status of the planning process and what lies ahead.

Liddy: Right now we are winding down the major part of the discovery process. The Steering Committee just this week received the reports of the Working Groups, summarizing their key findings and preliminary recommendations relating to their areas. The Working Groups included students, faculty, and staff, and each group had a designated focus area—Undergraduate Excellence, Strategically Focused Research and Doctoral Programs, Leadership in Veterans and Military Affairs, Enhancing Internationalization, Innovation and Institutional Renewal, Student- and Faculty-Centered Operations, and Professional Programs Excellence.

The Steering Committee will take these reports, and input from Wednesday, and start reviewing the findings, identifying overarching themes and objectives, prioritizing recommendations and then formulating a preliminary draft.

Q. What is the timeline for producing a draft? And will there be an opportunity for additional input?

Liddy: Yes, absolutely. At this time, we plan to post a first draft of the plan by early April. This is a very tight timeline, and I want to emphasize that this will be a rough draft, not a final draft. The plan will be posted for review via the Fast Forward Syracuse web site so that folks have the chance to give feedback as soon as possible before a subsequent draft is submitted to the full Board of Trustees for review.

Q. How are you determining final recommendations? Who decides what is included?

Liddy: This is the really challenging part, and we’re just now getting into it. The Steering Committee will be formulating the final recommendations drawing from the reports of the Working Groups and any input that we get on Wednesday. Those Working Groups have done outstanding work over the last several months in collecting ideas and information and prioritizing recommendations. What the Steering Committee will now be looking for are recommendations that feed into those overarching aspirational goals that we believe will advance progress toward achieving our vision and mission.

We don’t want this plan to just show us how we can continue doing what we’re doing, only better. We want it to really build on those areas of excellence that make the University distinctive or have the potential to advance us into new and innovative directions in response to emerging needs and opportunities in the world. Today’s higher education landscape is incredibly challenging, and the University has tremendous strengths that we can build on to take advantage of some of the changes that we see and to distinguish ourselves among our peer institutions.

Q. If I submitted an idea for inclusion in the plan, can I expect to see it in the final draft?

Liddy: Possibly, but not necessarily. Again, this is the hard part. All the ideas and submissions will have been discussed by the Working Groups, and those that are included in their final reports will be taken into consideration by the full Steering Committee. And although choices will have to be made, this plan is very much intended as a living document, evolving as needs and opportunities arise down the road. Some ideas that are tabled or ranked as a lower priority certainly could rise to the top at some later time.

I also would note that in this plan we are taking the “large view,” focusing on University-wide goals rather than on those that may be specific to, or fall within the limited purview of, individual schools and colleges. While the recommendations and themes will touch on all of the schools and colleges, the expectation is that it will form a guiding foundation by which the schools and colleges can then develop their own strategic road map forward.

Q. How does the plan intersect with the Operational Excellence and Campus Master Plan pieces of Fast Forward?

Liddy: The entire Fast Forward Syracuse process is driven by the Academic Strategic Plan, so what we put forward in a final plan will be very much tied to the work of those two complementary efforts. The charge of the Operational Excellence team is to improve the way the entire University operates, with the purpose of generating funds for targeted goals that emerge from the Academic Strategic Plan as well as the Campus Master Plan. Likewise, the Campus Master Plan intersects in that it will help guide decisions related to strategic infrastructure needs to ensure we have the facilities and resources needed to be a world-class university.

Q. What is the status of the Mission/Vision statements, and how was campus input considered?

Liddy: We will have a final version of the Vision and Mission statements, and we’ve worked incredibly hard to ensure that they capture a collective sense of the campus community’s highest aspirations for the University. As far as process, a proposed draft of the Vision and Mission statements was first presented to the University community in the fall of 2014 with an open comment period. After some revisions based on that initial feedback, a draft was submitted to the Board of Trustees for preliminary review, which was then followed by a second open comment period. In sum, a total of 145 comments were received during both open comment periods, and these were used to guide revisions to the statements.

Q. What happens next? Can you give a sense of the timeline ahead?

Liddy: Absolutely. At this time, the Steering Committee is scheduled to have a first draft ready by early April. The document will be posted on the Fast Forward Syracuse website for review, during which the campus community may offer feedback (again, via the website). After the comment period, it will go back to the Steering Committee for any additional tweaking or revisions, and a subsequent draft will be sent to the Chancellor in late April and shared with the Board of Trustees in May.

Q. And then what? How will the final plan be implemented?

Liddy: Implementation is phase two, and I’m delighted that Provost’s Faculty Fellow Shiu-Kai Chin of the College of Engineering and Computer Science has agreed to spearhead that effort. It’s going to involve effort across all the schools and colleges, and mechanisms will need to be put in place to identify specific action steps for achieving goals and for assessing progress. It’s going to be a multilayered process, and development of a final draft of the plan is just the first step down that road.

Q. You mentioned Shiu-Kai’s role in guiding the implementation of the plan. Are the other Provost’s Faculty Fellows a part of this effort, and how many such Fellows do you anticipate appointing?

Liddy: At this time I have named three Provost’s Faculty Fellows, Shiu-Kai being the first, followed by Mehrzad Boroujerdi, who will focus on strengthening internationalization, and Cathryn Newton, who will focus on academic philanthropy; large-scale academic space planning; and academic programming initiatives related to these two areas. These positions clearly intersect with some of the key focus areas and needs that we anticipate emerging from the plan.

As far as the number of Fellows, there may be some additional appointments as the need arises, but I don’t anticipate any more beyond these three in the immediate future.

Q. How long-term is the plan? Will there be opportunities to update/revise down the road?

Liddy: There is no set time period for the strategic plan, although clearly it is a multiyear process since implementation can’t even begin until next fall. And yes, as mentioned earlier, this document is very much intended to be a living document, meaning that it is expected to evolve as opportunities arise.

Finally, I would just like to give a tremendous thanks to all those folks who have been and continue to be involved in this effort. It is challenging work, especially trying to capture the aspirations of such a vibrantly diverse campus community into one document. But I know the outcome is going to be well worth the effort.