Leave it to Jedidah Isler to make an astronomical impact.

In December, the astrophysicist was named a TED Fellow for the Class of 2015. Next month, she travels to Vancouver to join 20 other fellows and the TED community at large for a five-day conference on the theme of “Truth or Dare.” 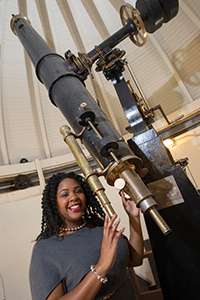 Founded in 1984, TED (Technology, Entertainment, Design) is a global series of conferences on scientific, cultural and academic themes.

“It’s an incredible opportunity,” says Isler, a Chancellor’s Faculty Fellow in physics in the College of Arts and Sciences. “TED Fellows work across the disciplines, challenging existing paradigms and pushing the edges of their respective fields. I am pleased, honored and humbled to be part of such impressive company.”

Isler earned the fellowship in recognition of her pioneering study of blazars—supermassive black holes found within large galaxies. She is equally known for her tireless advocacy of inclusion and empowerment across racial and gender lines in the STEM (science, technology, engineering, mathematics) disciplines.

It’s with this background in mind that Isler will take the international stage in Vancouver. Not only will she deliver a “TED Talk” about her research, but she will also soak up other lectures, tech demos, art exhibits and stage performances that have made the TED the intellectual juggernaut that it is.

“I want to use the TED Fellowship to share what I’m most passionate about in the Universe,” says Isler, the lead author of a recent paper in the prestigious Astrophysical Journal (IOP Publishing, 2015). “I can’t wait to take part in conversations and share ideas with other fellows that could push the boundaries of scientific and social innovation.”

The TED announcement marks the culmination of a busy few months for Isler, who also is a visiting research fellow at the Harvard-Smithsonian Center for Astrophysics in Cambridge, Mass.

In October, she traveled to her alma mater, Yale University, to deliver the keynote address at the 45th anniversary of the Afro-American Cultural Center. The weekend-long program, titled “Inspiring Global Leadership in the 21st Century,” featured an array of guest speakers, including other prominent intellectuals, industry leaders and emerging talent.

The invitation was fitting for Isler, who is the first African American woman to have earned a Ph.D. in astronomy from Yale.

“It was a great experience,” says Isler, of her return trip to Yale. “The ‘House,’ as the Afro-American Cultural Center is called, was my sanctuary during graduate school. I was honored to go back there and share my vision of how STEM can be a tool for global leadership and social change. I want to build partnerships that, in turn, trigger a tsunami of STEM practitioners from underrepresented backgrounds.”

Isler has been interested in astronomy since she was 12. Following undergraduate studies at Norfolk State University in Virginia, she attended Fisk University in Nashville, Tenn., where she earned a master’s degree in physics and participated in the then-nascent Fisk-Vanderbilt Master’s-to-Ph.D. Bridge Program. Only Isler ended up going to Yale.

“I appreciated everything Fisk and Vanderbilt had to offer, including a supportive community of scholars and a vibrant research program,” she says. “I took that incredible support system with me to New Haven [Conn.].”

Since joining Syracuse’s physics department, Isler has expanded her work to include a study of the inner workings of black hole environments. She also has worked alongside the Gravitational Wave Group, which is part of the LIGO Scientific Collaboration, an international experiment studying collisions of highly dense neutron stars. This past fall, she traveled to Ecuador’s Galapagos Islands to address the International Astronomical Union’s symposium on extragalactic jets.

“We are proud of the excellence that Jedidah Isler brings to bear on Syracuse University and her profession,” says A. Alan Middleton, professor and chair of physics. “Jedidah’s contributions to astrophysics, her collaborations with other institutions, and her important work in enlarging the sets of active successful participants in the sciences are all important contributions, quite worthy of a prestigious TED Fellowship.”

A woman in a male-dominated profession, Isler understands the broader significance of her work.

“Women of color face unique barriers because of their position at the intersection of race and gender, not to mention class and socioeconomic status,” says Isler, who also is involved with the University’s WiSE Women of Color in STEM program and serves on the board of the Milton J. Rubenstein Museum of Science and Technology (MOST) in Syracuse. “Sometimes racial and gender discrimination is overt; other times, it’s not. Either way, it’s harmful. Addressing these issues is just as important as the astrophysical work I do.”