As technology advances to meet our ever-growing needs, the size of our electronics is decreasing while their performance is increasing. Computer chips are a good example of this. We want them to be small, yet capable of faster processing speeds. 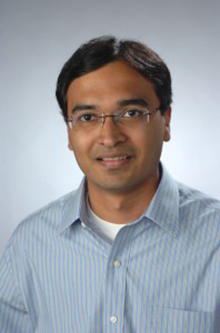 All electronics heat up when they are operating. However, the more work they do, the hotter they get, especially when they have a small surface area. All of this heat can diminish their performance significantly. Therefore, rapid and efficient cooling is going to be required to make next-generation computer chips and energy conversion devices possible.

One way to cool computer chips is with boiling—currently the most effective way to remove heat from a surface. Unfortunately, it has its limitations. First, a chip is encased in a heat-exchanging device. As the chip heats up, the heat is transferred to a liquid within the heat exchanger. When it begins to boil, bubbles form on the surface as in a pot of boiling water. The higher the heat transfer, the more rigorous the boiling becomes. With increasing heat, the number of bubbles forming on the surface outnumbers those leaving the surface, causing an accumulation of bubbles that creates a layer of vapor, inhibiting the transfer of heat from the surface into the liquid. Because of this, heat removal tops off at 100-300 watts per square centimeter of area. While substantial, this is still not enough for next-generation devices, where cooling rates of over 1,000 watts per square centimeter are desired.

“Theoretically, we can prevent boiling with use of novel nanotechnology, and achieve nanoscale evaporation, which can remove 10 times as much heat compared to boiling,” says Maroo.

Maroo and his research group will design, fabricate and test nano-devices using molecular-level computer simulations and experiments, and they also aim to uncover the parameters that dictate the steady and optimal performance of the nanoscale evaporation-based device. Eventually, this knowledge could be applied to achieve next-generation heat exchangers for thermal management of electronics and renewable energy technologies, such as concentrated solar photovoltaic cells.

Maroo acknowledges that part of the credit for his NSF CAREER grant should go to the research and hard work of his students, especially Ph.D. students An Zou and Sumith YD, and senior Nikolay Rodionov. Additional information about Maroo’s grant and his research group can be found here and on his lab’s website —  http://maroo.syr.edu .

Maroo’s research includes development and implementation of a three-week module on “Nano-science and Nano-engineering” for first-year undergraduate students in ECS 101. He will also support a yearly research opportunity to a minority undergraduate student and yearly workshops on nanotechnology to middle school students in the Syracuse City School District in collaboration with the Upstate Louis Stokes Alliance for Minority Participation.