The Science of Slime: Why We Care Where Biofilms Stick

For every human cell in our bodies there are 10 bacteria cells.

When bacteria—good or bad—stick together, they form a slimy layer called a biofilm that adheres to surfaces inside or outside of the body. A good example is inside your mouth, which is coated with a biofilm that you can feel. 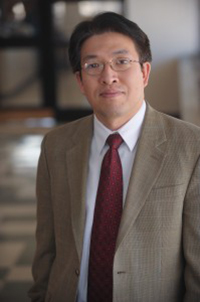 One place that harmful biofilms are a major concern is in implants, such as knee or hip replacements. Bacteria have a way of finding a niche in these foreign parts. It doesn’t happen to everyone with an implant, but when it does, it can create a painful infection and has the ability to spread through the body and become life threatening. Commonly, the only solution is to completely replace the implant, and even that won’t guarantee that the infection will be cleared. An even bigger problem is catheter-associated urinary tract infections. It is estimated that 90-100 percent of patients who undergo long-term catheterization become infected.

New research by College of Engineering and Computer Science Professor Dacheng Ren is an important step toward understanding how the materials used for implants could be re-engineered or altered to repel the infection-causing bacteria and attract beneficial human cells to the implant from the start—avoiding infection and allowing the body to better accept the artificial implant.

In the past few years, Ren’s biofilm engineering lab has studied the effects of material properties on biofilm formation, including surface chemistry and topography. In a research paper recently featured in Langmuir, a leading journal, Ren also explores how the stiffness of cross-linked poly(dimethylsiloxane) (PDMS) affects bacterial adhesion and the growth, morphology and antibiotic susceptibility of attached cells. Ren discovered that escherichia coli (E. coli) and pseudomonas aeruginose biofilms were less likely to stick to a stiff polymer surface than they were to a soft one, and the stiffness of PDMS has profound influence on the physiology of attached cells.

Ren says, “We know that people are more comfortable sleeping on a soft, yet relatively firm surface—not something as hard as a concrete floor or as soft as a gel. The question we set out to answer was, ‘How much do bacteria care about the stiffness of the surface they rest on?’ We looked at literature that showed that they might, but this topic has only been scarcely touched. We were surprised by just how much they cared. Our results revealed that surface stiffness is an important material property that influences the attachment, growth and stress tolerance of biofilm cells.

Another place that biofilms are a concern is in hospitals, where biofilms, especially those of antibiotic resistant superbugs, take hold on surfaces in the environment and cause severe illnesses and death. These cells are often able to survive the common decontamination processes that are used on surfaces in health care facilities. Through a process called horizontal gene transfer, bacterial cells actually spread their ability to survive sterilization with other bacteria. When they live in biofilms, there’s a greater chance for this to occur. 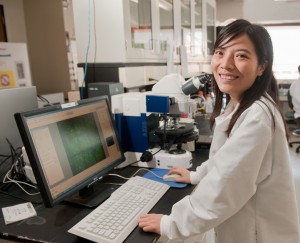 Through a new grant from the Alfred P. Sloan Foundation, Huan Gu, a postdoctoral researcher in Ren’s lab, received a postdoc fellowship and will conduct research on bacterial persistence and horizontal gene transfer in the built environment. Here, they will explore how surfaces in hospitals, ranging from tabletops to the tools that are used, can be better designed so that biofilms cannot persist and continue to spread extremely harmful bacteria.

“Our goal is to interrupt the horizontal gene transfer and reduce the persister cells, which are dormant bacterial cells highly tolerant to antimicrobials, by controlling the surface topography and/or the stiffness, of surface materials. By creating nanomicrostructures or etching grooves on the surface with specific patterns, we may reduce the level of the persister cells,” says Gu.

Through this work, Ren’s lab continues to uncover new evidence about the effect a surface can have on cells in sticky biofilms, fulfilling his mission to understand and control these biofilms in the fields of disease control. Eventually, this knowledge may be used for a variety of applications that help us avoid harmful infections and keep us healthy.