As the world’s attention turns to alternative energy solutions, such as wind and solar, nuclear energy is an often overlooked or controversial option. And yet, nuclear power from 104 plants supplies approximately 20 percent of the electricity we use today. 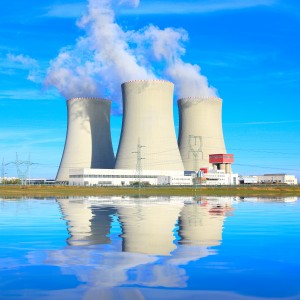 Processing of waste has been a barrier to the increased use of nuclear power.

Nuclear power has been the subject of controversy, much of which stems from the disposal of radioactive nuclear waste. In the U.S., the plan had been to store it in a nuclear waste repository in Nevada’s Yucca Mountain. The facility is currently shut down due to environmental concerns. However, its future is now under review by the Nuclear Regulatory Commission and it could potentially be revived. Regardless of a solution for long-term storage, it remains desirable to process the country’s nuclear waste to reduce the amount that is created. By extracting and recycling valuable components from the waste, we can get more use out of it.

Nuclear waste recycling isn’t happening in the U.S., but research is being conducted to improve how it can be done safely and effectively. At the College of Engineering and Computer Science, Professor Larry Tavlarides is actively researching a way to capture harmful gases that are emitted during the recycling process.

Used nuclear fuel rods from power plants, and the spent fuel they contain, are typically stored for future disposal after one use. Every power plant in the country is accumulating large numbers of spent fuel rod assemblies, stored in liquid pools of water or dry cask storage. But, if proper measures are taken, it is possible to reprocess the waste to pull out and reuse actinides—the radioactive elements that are used as fuel in reactors.

When nuclear waste is reprocessed, you also get leftover waste and off-gassing of vaporized radioactive iodine, krypton, xenon, tritium, carbon dioxide and other gases that pose environmental danger. Tavlarides’ team has received a grant from the U.S. Department of Energy to determine an optimal way to capture these gases in nuclear recycling plants. They will develop models and gather and validate data using hands-on experimentation.

In his lab, researchers will study the adsorption of vaporized iodine (to simulate radioactive iodine) and water (to simulate radioactive tritiated water) using two types of tiny pellets—molecular sieves used by the petroleum industry for drying and cleaning technical gases and silver mordenite for iodine adsorption. They will pass the gases through a single layer of pellets, suspended on a screen attached to a microbalance, and use the adsorption level of the gases to understand what is happening at a microscopic level. They also pass the gases through a 6-8-inch column of pellets to see the effect and mathematically model the process. The idea is that in a real-world scenario, these pellets would fill 10-12-foot-high columns through which the evolved radioactive gases generated during waste fuel processing are passed for capture. As off-gassing occurs, all of the harmful vapors would be effectively contained in the pellets for proper disposal.

Solutions like this can ultimately lead to a reduction in the amount of nuclear waste being produced and may lead to an increase in the use of nuclear energy, minimizing the dependence on fossil fuels while reducing greenhouse gas production.

Tavlarides explains, “I’m obviously in favor of nuclear power. It’s a major contributor to our energy supply through the electric grid. The holdback is, we have delayed efforts to secure a site for safe storage of the nuclear waste and that’s something we could do and should be doing. Waste recycling can play a major role in this and we could easily produce more electrical power from nuclear. It’s important and it can be done safely.”