A part-time graduate student in the School of Information Studies who admittedly has “no formal computer science background” has placed in the top five finishers in IBM’s coding and technology skills “Master the Mainframe” competition. 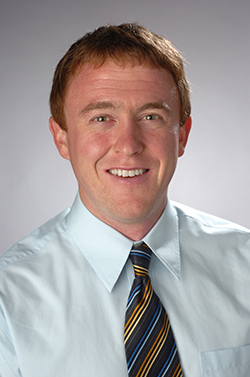 Steven Hoover, an information management graduate student, delved into coding and enterprise computing last fall just for the fun and challenge of a new pursuit, but his standing puts him in a highly select category among the 4,000-plus participants in IBM’s 2014 competition.

Hoover had done “some HTML and some XML, and I knew a little bit of UNIX” before taking a graduate section of GET 239, “Enterprise Technologies,” he says. Still, Hoover “had never written a single line of COBOL code or JCL before taking Professor [David] Dischiave’s class,” he adds, noting, “At the end of the year, and a couple of books later, I’m ending up in fifth place, so if I can do it, anybody can. It was all the result of things I learned from Professor Dischiave.”

Being in the top five winners–or even finishing Part 3 of the three-component competition–“is a really big deal” in the mainframe computing field, Dischiave says, likening his student’s top placement to winning the lottery in terms of its career-defining distinction. “The competition is very, very challenging. There’s so much competition that to get that far says a lot about your problem-solving and technical prowess. You can do things that most people could never do.”

“While learning and applying z/OS technology skills can get a contestant into Part 3, desire to excel, persistence and work ethic are defining characteristics of the students that are listed on the Part 3 Wall of Fame,” says Paul Newton, a Consulting IT Specialist at the IBM Innovation Center. The Part 3 top-five finishers are likely to receive the most attention from large enterprises, he adds, noting that “IBM System z clients review the Master the Mainframe Contest Wall of Fame each year to recruit students exposed to z technology.”

The win was unanticipated, but is a pleasant surprise, says Hoover, who entered it thinking he had nothing to lose. “I wanted to know how I stacked up. It seemed like a good challenge and I thought I would have a good opportunity to learn more and have a little bit of fun doing it.”

His interest in learning to code and then undertake the mainframe competition stemmed from “wanting to do something different than the rest of my education and experience up to that point,” he says. Hoover has been working full time in the library field since 2008 and has a number of scholarly articles and research efforts to his credit. He has been working as a senior assistant librarian in Syracuse University’s Bird Library Learning Commons since 2012. In addition to his master’s degree in library information science from Indiana University, Hoover also has a bachelor’s degree in English and psychology.

In recognition of their achievements, Hoover and the other top winners will be hosted by IBM engineers and executives for an excursion to the company’s mainframe production facility this spring. They’ll get to see how IBM’s largest and most powerful computing systems are built, and gain valuable interactions with the system architects.

Working with mainframe computers is exciting and challenging for Hoover, although he thinks  many people may regard them as old technology. Instead, “They are incredibly important and useful,” he notes, “and without them, things like debit and credit cards, online banking, airline and hotel reservations wouldn’t be feasible.  We’d basically go back to doing a lot of transactions by phone, fax and in person without these kinds of systems. They are so stable and so reliable that we take them for granted and expect them to work. But it’s not that simple, and when you think about what’s actually happening at scale with these types of transactions, it’s incredibly impressive.”

Hoover hopes to find a position working in information technology, specifically in enterprise technologies and mainframes. Until such an opportunity materializes, he plans to continue working as a librarian, staying on as a teaching assistant to Dischiave and continuing his IM coursework. He urges other students to explore the enterprise computing course, GET 239, which he calls “probably the coolest course you can take as an iSchool undergraduate,” and to challenge themselves to learn coding skills. He advises, “Without good teaching and without good guidance, [coding] can be very intimidating, but if you have a well-designed class, a great professor and realistic problems to work on, it breaks down some of those barriers, and becomes very doable.”

Several others students from Syracuse University also were cited for completing Part 2 of the competition. They are: Jacob Greiner, HeeDong Jang, Jun Bum Kim, Rio Maulana and Qi Yin Wu.