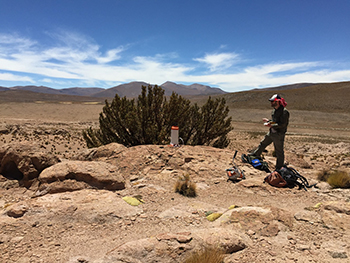 Earth scientists in the College of Arts and Sciences have received a major grant to test a new technique for measuring tectonic uplift.

Gregory Hoke, assistant professor of Earth sciences, and Devin McPhillips, a postdoctoral research associate, are the recipients of an Early-Concept Grant for Exploratory Research (EAGER) award from the National Science Foundation. They will use the $147,000 award to determine whether or not cosmogenic nuclides— isotopes produced in minerals during exposure to cosmic rays—determine shifts in elevation of slowly eroding South American mountain landscapes.

Hoke calls the one-year grant, awarded by the NSF’s Tectonics and Geomorphology & Land-Use programs, a “proof-of-concept study.” He says that all current paleoelevation studies rely, in one way or another, on past atmospheric circulation patterns. “That’s their ultimate limitation,” he adds. The goal of this study is to create a novel paleoaltimetry tool that accurately measures paleoelevation and surface uplift rates all over the world, independent of atmospheric circulation.

“Cosmic rays are constantly bombarding the Earth,” says Hoke, who studies the interplay between the Earth’s tectonic and surface processes. “When this happens, rare isotopes [atoms with different numbers of neutrons than protons and electrons] are formed. The higher the surface elevation, the thinner the atmosphere, and the greater the flux of cosmic rays that produce rare isotopes of beryllium, aluminum and neon. We want to exploit this increase in rare isotopes, with elevation as an altimeter.”

Already, Hoke and McPhillips have used the EAGER grant to travel to South America to collect an array of rock samples from the western flank of the Andes Mountains and from the western edge of the Andean Plateau in Bolivia, Chile and Peru. The samples are from elevations between 2,625-14,764 feet (600-4,500 meters).

Their next step is to analyze the samples with Hella Wittmann-Oelze and Samuel Niedermann, researchers at the GFZ German Research Centre for Geosciences in Potsdam. If their efforts are successful, Hoke and McPhillips may resolve a long-standing debate over the timing of the Andean uplift.

“Our goal is simple: to determine if the mountains rose quickly over a short period of time or if they underwent a slow, progressive topographic growth,” Hoke says.

“Various methods have been used to measure uplift rates and paleoelevation to varying success and with varying degrees of uncertainty,” Hoke adds. “Our approach aims to reduce these uncertainties, while shedding light on the fundamental forces that generate these tectonic features.”