As a software engineer and manager at several Boston-area startup firms, Jeff Stanton became increasingly intrigued by the ways software development teams functioned. Some teams meshed well and were nimble and highly productive. Other teams worked poorly, produced buggy code, and failed to meet their project deadlines. Eventually, Stanton’s interest in how teams work, and the organizational environments that promote or prevent their success, pulled him away from computer science and toward organizational science. After being out of college for nearly a decade, he went back to graduate school to earn master’s and doctoral degrees in organizational psychology. Throughout his graduate studies, his interest remained strong in how organizations create technology and how technology changes organizations. 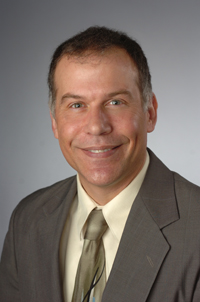 Stanton’s comfort level with organizational change prepared him well for his subsequent path in academia as an information science researcher, faculty member, academic leader and, most recently, interim dean of the School of Information Studies (iSchool). Named to that position by Chancellor Kent Syverud, Stanton began the role on Jan. 1, succeeding Dean Elizabeth Liddy. Syverud concurrently named Liddy interim vice chancellor and provost for the University.

As Stanton leads the iSchool into the next era, he has stated that it will be from the vantage point that the School’s existing base of excellence is both highly distinctive and deeply treasured.

In Service of Users

“There are always fast moving trends in technology, and of course we will respond to those and adapt our curriculum and programs to take those trends into account. But the strength of the iSchool has always been in not just chasing the latest technology trends, but in understanding the connection of the user to what’s happening with information and technology and appreciating that technology is always a tool that’s in service of users,” he explains.

The iSchool’s vitality stems from its “Faculty of One” culture, Stanton believes, an ideal he would “like to strengthen, and to the greatest extent possible, like to help us to develop into an ‘iSchool of One.’” This process would include “thinking about our faculty as the heart of a whole community that includes our staff and students, our alumni and our board. That sense of unity and people working together for a common mission, that’s a cultural advantage that we have over many, many other places,” he emphasizes.

The Strength of Unity

The benefit of thinking and acting with unified interests, “makes an organization that’s agile. You can make room to innovate and create quality experiences. While there’s no situation where everyone will agree on everything, a strong culture allows a diversity of opinions while it continues to work together harmoniously,” Stanton suggests.

Effective collaboration and harmony are concepts that Stanton understands from personal experience, as well as from his own academic research. He attends a monthly musician’s gathering, an informal social circle he says is an “institution” that iSchool faculty colleague Michael Nilan has nurtured for decades. On one level, Stanton explains, the musicians are each there for their personal love of the music. But at a deeper level, the interactions between people who are creating songs together “goes very deeply to the heart of emotional interaction between people; it’s a way of connecting. Many faculty and staff members from all over the University attend … and on the best nights, it’s airborne,” the longtime guitarist and songwriter enthuses. Stanton is also a member and the bass player for the iBand, a cover band started by iSchool faculty colleague Dave Dischiave to play for student events and other functions around campus.

A Link in Stewardship

Since joining the iSchool in 2001, Stanton has worked with Deans von Dran and Liddy, and now sees his role as another stage in the school’s stewardship. “Whoever is on the leadership team of a school or a college or a university, they’re a link in a chain, and they have a responsibility to the past and history and tradition, but they also have a responsibility to the future. In addition to innovation, there also has to be continuity, so being a steward means being well prepared for the success of the next generation,” he says.

Stanton joined the iSchool as an assistant professor, receiving tenure in 2004. He was promoted to full professor in 2011 based on research work that includes books, journal articles, book chapters and conference papers. He has obtained more than $5.5 million in outside funding, including the National Science Foundation’s CAREER award. Stanton was recently a fellow of the American Council on Education in its emerging leaders program. This program gave him the opportunity to serve an apprenticeship in the Office of the President at SUNY Cortland, where he worked on projects in student services and advancement. During his fellowship year, Stanton was also certified as a campus planner by the Society for College and University Planning.

In 2014, he was selected as a fellow of the Leading Change Institute, co-sponsored by EDUCAUSE and CLIR. Formerly known as the Frye Institute, Leading Change provides leadership training for individuals involved in higher education librarianship and information technology professions. Stanton has previously served Syracuse University in campus-wide roles as associate vice president for research and as chair of both the Institutional Review Board and the Senate Administrative Operations Committee.