Carrier Dome Runoff Now Being Put to Use

With a seven-month-long project complete, rain and snow falling on a portion of the Carrier Dome roof is now being put to good use. The storm water is being used to help flush toilets in the stadium, rather than the storm water going directly to the Metro Sewage Treatment Facility. 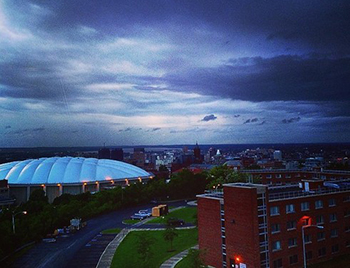 Runoff from rain and snow falling on the Carrier Dome’s roof will be used to flush the Dome’s toilets.

“This is one of those projects you become very proud of,” says Pete Sala, senior associate athletics director of facility operations and Carrier Dome managing director. “This building is 35-years old, yet we’re adding elements that help us take it into the future.”

The complex system funnels rain and snowmelt from a portion of the Carrier Dome rooftop into underground storage tanks, allows for filtration and chlorination of the water, and then puts it into holding tanks, where the water is pumped into the women’s and men’s rooms for use in toilet cisterns. See an inforgraphic that explains the process here.

Not only is the storm water being put to use, it’s also taking away some of the burden on the sewage treatment plant.

“Typically 50,000 gallons of storm water would just go directly to the metro sewage facility,” says John Osinski, senior project manager in the Office of Design and Construction. “Instead, we will be putting that water to use and delaying the amount of storm water going directly to the sewage treatment plant.”

“Communication design students (from the College of Visual and Performing Arts) were involved in providing the Dome signage explaining benefits of the system,” says Rachel May, coordinator of sustainability education. “Students from the School of Architecture studied the mechanisms used in construction, and civil and environmental engineering students worked on a project suggesting further enhancements the system.”

“Through our Green Innovation Grant Program, New York State is making an historic investment in green technology, particularly here in Onondaga County,” says Matthew Driscoll, president and CEO of the NYS EFC. “New York is a national leader in environmentally friendly innovation, which creates jobs while protecting the environment. The Carrier Dome project will ultimately contribute to improved water quality in Onondaga Lake by reducing the amount of stormwater entering the sewer system.”

The system is visible in an interactive display involving the mechanical room (located directly inside Gate D), along with purple piping running along some of the interior hallways.

“With the amount of water that comes off this roof, this is a big benefit to the environment,” according to Sala. “This is a great system.”

Media coverage of the announcement: