As most people know all too well, you often can’t pick the person sitting next to you on an airplane. Sometimes that can make for an unpleasant flight, especially if your neighbor had a plate of garlic fries in the airport food court or skipped a shower before hopping on the plane. Professor Thong Dang aims to protect us from the world’s more fragrant travelers by addressing the air quality in airplane cabins. 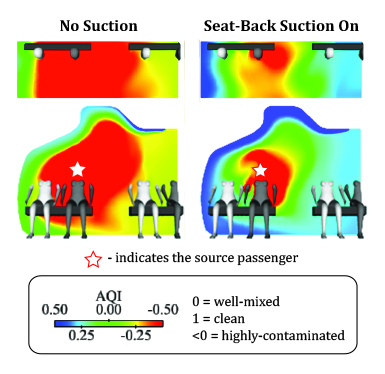 Dang, a professor in the Department of Mechanical and Aerospace Engineering in the College of Engineering and Computer Science, has developed a scientific solution to our nasal woes. What we’d call body odors, he politely calls “emissions or contaminants,” and he has developed a method to address unpleasant scents coming from the people around us by implementing a local source control. “If you can’t prevent the emission, then you have to stop it from spreading,” he says.

In current airplane cabins, air flows in from above a passenger’s head and then out through vents by the windows. Half of the air is fresh and the other half is recirculated. The fresh air being added to the cabin is precious because it comes from the engine compressors, and if you take too much you will cut into the overall performance of the aircraft. It would not be a good solution to increase the amount of fresh air used. Therefore, the goal is to remove as much contaminant as possible from the recirculating air to make the solution energy neutral.

The airflow in a cabin is also very complex and difficult to predict. This means that the contaminant would need to be removed in relatively close proximity to its source, before it gets mixed in with the cabin’s swirling air.

To address these realities, Dang proposes the addition of “suction orifices” at every seat, either in the seat back over each person’s shoulder or in a hood on the seats over each passenger’s head. These recommendations were included in his paper with graduate student Ryan Dygert, “Experimental validation of local exhaust strategies for improved IAQ in aircraft cabins,” recently published in the journal Building and Environment. The air around each passenger would continuously be pulled through these vents to be discarded or recirculated.

He has tested both solutions in his lab by constructing a simulated cabin of a Boeing 767. Two of its “passengers” are plain-faced mannequins with sensors strategically placed around their noses. A third passenger, sitting between the other two, is the source of the problem, emitting a measurable concentration of tracer gas from his armpits into the air around him. 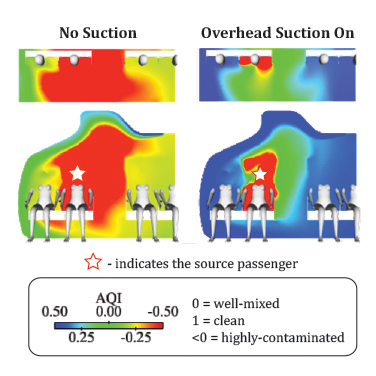 To determine the effectiveness, Dang uses an air quality index (AQI). “If the air is equivalent to an AQI of 0 it is well mixed and everyone in the plane gets the same, level of concentration. If the AQI is 1 then it is 100 percent clean air, and no contaminant reaches the people around the source. If it is negative, then it means it is worse than well mixed and creates poor conditions for the neighboring passengers, “ Dang explains.

When the contaminant is released, the air quality drops below zero and things get unpleasant for the passenger across the aisle and even more so for the one by the window. By turning the system with the suction orifices in the seat back to 50 percent of the total flow rate, 42 percent of the contaminant is removed. By turning on the system with the hood overhead, 68 percent is removed. In both cases, the situation has improved significantly for the other passengers. Cranking the system up to 100 percent removes 62 percent of emissions with the seat back solution and 91 percent with the hood solution, providing even better conditions for the passengers.

While there are no plans for these to be installed in airplanes today, this may be a solution in the future that could improve the comfort of air travel. Dang believes that this solution could be extended to trains, buses, auditoriums and office cubicles. We still may not get to choose who we get stuck next to, but Dang’s work may ensure these situations don’t stink—at least in the literal sense.