Geologists in the College of Arts and Sciences are close to confirming what many scientists have long thought to be true—that human hair is an archive of geospatial movement. 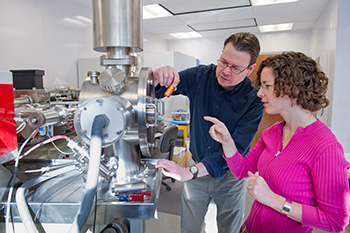 Scott Samson works with a student in his lab.

Scott Samson, professor of Earth sciences and a faculty fellow of the Forensic and National Security Sciences Institute (FNSSI), is leading a multiyear study of strontium (Sr), a metallic element found in igneous rock, as well as in human hair, teeth and bones. By taking hair samples at specific intervals around the globe, he and FNSSI graduate student Lindsay Blotzer G’15 hope to prove that strontium isotopes function as a kind of human provenance tool.

“Some people may be surprised to know that they inherit strontium from the environment through their food and water,” says Samson, who also serves as associate chair of the Earth sciences department. “Because hair grows approximately a centimeter a month, it acquires enough strontium to reflect one’s geological surroundings. Such data may be used not only to identify the location of a murder victim, since bodies are sometimes dumped after a homicide, but also to track the geographic movement of a suspect.”

Samson says that, in addition to forensic and environmental toxicology, hair chemical analysis may serve as a utility in counterterrorist strategies. “The implications here for geology, anthropology and forensics are unprecedented,” he adds.

James T. Spencer, FNSSI’s executive director and a Meredith Professor of Chemistry, is excited about the findings. “There are a number of biometric studies that suggests hair provides provenance,” he says. “What makes Scott’s research unique is that it’s being done under carefully controlled conditions, utilizing state-of-the art instrumentation and expertise.”

Samson’s research involves two types of strontium, 87Sr and 86Sr, which are naturally occurring, nonradioactive and nontoxic. A naturally occurring form of the element rubidium (87Rb) decays to 87Sr but not to 86Sr. Therefore, the ratio of 87Sr to 86Sr varies in rocks of different ages and types.

He explains that older rocks have more time for rubidium to decay to 87Sr; as a result, they have higher 87Sr to 86Sr ratios than younger rocks. And since soil and water mimic the strontium ratios in rocks, they are able to deliver the element to living organisms.

“What we put in our mouths reflects the average strontium ratios of our environment,” Samson says. “This ratio is locked into our teeth as children but not into our hair, which is always growing and contains trace amounts of strontium. New hair reflects new surroundings.”

Samson and Blotzer are developing what they call a “Syracuse Sr Record” by compiling hair samples every few days. Samson does his part by collecting hair from his beard and scalp; Blotzer, from her scalp, armpits and legs. Afterward, they analyze the samples using a sophisticated technique called thermal ionization mass spectrometry. It is done in the new, state-of-the-art Radiogenic Isotope Laboratory, located in the Heroy Geology Laboratory.

“This is the first study to determine whether or not all the hair on our body has the same isotopic signal,” Samson says. “My hypothesis is that it’s all the same, regardless of the effects of soaps, shampoos and conditioners. But a gut feeling in science is worthless unless I can back it up with experimental data.”

Samson says he and Blotzer are on track to create the first “robust record” of strontium ratios in Central New York.

“The idea here is that we are what we drink,” he says. “We change our body chemistry every time we consume something, and some of these changes are captured in our hair and fingernails.”

Samson looks forward to comparing his hair samples from Syracuse with those from a recent trip to Sacramento. He also plans to collect samples during upcoming trips to New Zealand and Scotland.

“The isotopic compositions of oxygen, hydrogen and strontium vary from place to place,” says Samson, who is developing an honors course along these lines for next semester. “By measuring isotopic ratios in my hair, I can show that I’ve traveled to different parts of the world and back. This kind of information is important to someone who tracks terrorist movements or handles medicolegal death investigations.”

Kevin S. Sweder, professor and director of research and operations for FNSSI, says excitement is high, regarding extension of strontium analysis to short time periods: “The rate of accumulation in hair can reveal residence in an area of relatively short time spans, while accumulation and loss of strontium in bones can cover longer periods of time in an area or after the individual has left it.”

He and Spencer agree that Samson is on to something. Spencer, in particular, thinks Samson’s work will not only elevate FNSSI’s role in forensic studies, but also redefine the possibilities of anthropological and forensic science. 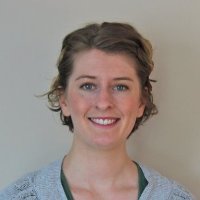 But behind every great researcher is often another one in the making.

“Lindsay’s scientific curiosity has led her to develop her own research concentration in the forensic M.S. program,” Sweder says. “Her zeal is exemplary, and we are confident she will continue to have a strong impact on forensic geology.”

“I am excited by how [our research] will impact the study of stable isotope forensics,” says Blotzer, who recently completed post-baccalaureate studies in genetics and molecular biology at the University of North Carolina at Chapel Hill, after earning a bachelor’s degree in environmental studies at the University of Pittsburgh.