When the installation of Windows 8 was complete on Nick Danyluk’s laptop, he discovered with disappointment that the interface was geared toward monitors with touch screens, which was not something his computer featured. In this scenario, most people would seek out a way to make do or revert to the more familiar layout of Windows 7. 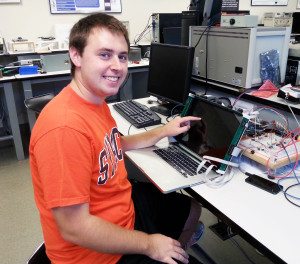 Nick Danyluk at his computer

Danyluk is not most people. Instead of taking the easy way out, he chose to employ a more challenging solution—invent a device that converts his ordinary monitor into a touch screen.

After nearly a year and a half of designing, building and fine-tuning, BeamBreak was born. Small and light enough to be carried in a backpack, the device is little more than four long thin circuit boards connected to each other to form a rectangle that fits directly over a 15-inch monitor. These are wired to another small, square circuit board, the device’s “brain,” situated behind the screen. To power it, a short USB cord plugs into the laptop’s port. The inside of the rectangle is lined with tiny clear LEDs that flash beams of infrared light across the screen to black phototransistors on the opposite side, generating an invisible grid.

When you touch the screen, your finger blocks two intersecting beams of infrared light. With this, Danyluk’s code is able to determine where you are touching and tells Windows. The operating system takes it from there and the effect is virtually indistinguishable from the touch screens of top manufacturers.

A senior in the College of Engineering and Computer Science’s electrical engineering program, Danyluk is eager to find innovative solutions using the knowledge he is gaining in the classroom. His work on BeamBreak is indicative of this. Inside and outside of his studies, he is engaged and passionate about technology, and he’s having fun doing it.

Q: It’s clear that electrical engineering is a good fit for you. Why did you choose to study this subject?

A. I’ve always liked to tinker.  I took programming courses in high school and spent a lot of time learning about my family’s home computer. That carried over. At 12 or 13, I was replacing the memory and upgrading video cards. I considered pursuing computer science, but I can’t see myself programming every day. Although I’ve seen the computer engineers build some amazing things, that’s not for me.

I feel that electrical engineering is much more hardware-centric. The real draw was that I could work on projects like this, and once I learned the fundamentals, I found that there is so much you can do with engineering. It’s a broad field and Syracuse University has a great program. I enjoy having full access to the labs and my professors really encouraged and helped me when I was just getting started.

Q. BeamBreak has taken up a substantial portion of your free time. Have you made time to participate in other things at SU?

A. I’m a part of the IEEE professional society. It’s a place where you have a bunch of passionate people in one spot and it’s amazing what you can come up with. For example, I’ve joined the SU Micromouse team. Micromouse is a competition in which we design a robot mouse to make its way through a maze using the shortest path possible to the center. It has sensors on it that can detect if it has a wall next to it and uses an algorithm to dictate its strategy. I’m going to be involved with building the hardware. It’s a great example of the college’s majors overlapping—electrical engineering students build the robot and the computer engineering students figure out the software and how to get through the maze. We provide the body, they provide its brain.

Q. BeamBreak is complete and you are in your final year of your undergraduate education. What’s next?

A. Just for fun, I’ve started work on a robot that moves around the room and bumps into things like a Roomba vacuum cleaner does. It will also post to the internet to announce how its day is going.

As far as after college, I am looking for a full-time job. I’ve always really liked consumer electronics and am gravitating toward a career in that. I would love to work on the latest laptops, phones, tablets, 3D printers or other cutting-edge gadgets. I want to build things and have tangible results.

Q. So much of what you are involved in is above and beyond your academic responsibilities. What do you get out of these experiences that make them worth your time and energy?

A. The easy answer? It’s fun. There are parts that are a struggle. I had a weird bug with BeamBreak where it was nearly short-circuiting the USB port because one line of my code was wrong. These kinds of roadblocks are frustrating and can leave you banging your head up against the wall, but the end result is worth every second.

As an engineering student, there have been nights when I’ve had to pull an all-nighter, but also many nights when I am just able to hang out with friends. I have a group of friends that I met here that I wouldn’t change for anything else in the world. We’re very close-knit.

Through my academic work and related extracurricular activities, I can confidently say that if you gave me a box of circuit components, 24 hours and my computer, I can build something innovative with it. It’s a lot of work. It takes a lot of dedication and time management skills, but it’s been so positive. I’ve learned so much.