Through a partnership with the Museum of Science & Technology (MOST), the  College of Engineering and Computer Science is encouraging girls to explore science and inspire them to aim for a career in a scientific field. Assistant Professor Melissa Green of the Department of Mechanical and Aerospace Engineering hosted a full day of activities for 15 sixth grade girls taking part in the MOST’s Women’s Camp, a one-week program sponsored by a grant from the Central New York Women’s Fund for young women in the Syracuse City School District. The goal is to encourage girls to become even more passionate about science and show them what can be achieved by pursuing an education in engineering, an area where women remain underrepresented. 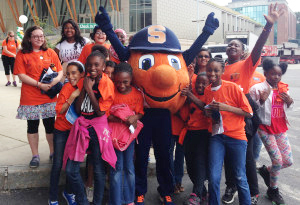 “This camp is a mixture of things. The girls learn about science and technology during the week in a really fun way. It’s always something that engages them and makes them want to go on and learn more. Some of these girls wouldn’t ordinarily have the resources to go to a camp like this, or any other camp for that matter. It’s two-fold­­­­—it’s learning, but it’s also an opportunity to be with their friends and experience a summer camp,” said Meriel Stokoe, one of the camp’s adult leaders.

During their visit to Link Hall, the group learned from the college’s women professors and staff. They experimented with sediments with Professor Shobha Bhatia, played a video game about medicine delivery with nano particles with Professor Becky Bader, learned how the Carrier Dome stays inflated from Professor Sinéad Mac Namara, and shattered black-eyed susans dipped in liquid nitrogen with civil engineer Mariah Taylor. From there, they were off to the Syracuse Center of Excellence for a tour of the building and a demonstration of the water channel in Green’s lab.

Green says, “I was excited to provide these girls some exposure to the university research environment. I hope they came away with the impression that there are many different paths in science and engineering, but that we’re a community built on having fun with what we do for a living.”

The girls who attended to camp were selected from H.W. Smith School based on their desire to participate. In addition to the adult counselors, the camp also employs high school girls from the Syracuse City School District as “junior counselors” who serve as positive role models for the younger girls.