R. David Lankes Writes About Being ‘The Boring Patient’

School of Information Studies (iSchool) Professor R. David Lankes is known for breaking new ground in the library field, for thinking in innovative ways and for adding personality-laden twists to his teaching and information efforts.

He’s done all that once more with this week’s release of a new book, “The Boring Patient.” 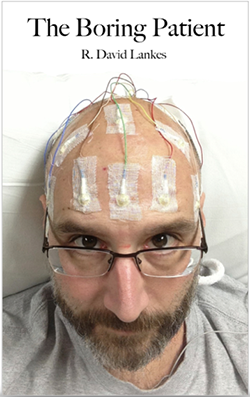 R. David Lankes wrote “The Boring Patient” about his experience of being a cancer patient.

The topic isn’t focused on librarianship. It’s a personalized and humor-filled account of his experience being diagnosed with, living with and being treated for cancer over the last two-plus years.

“I tried to make it a relatively funny book, in the sense that when you’re facing these kinds of big issues, life threatening issues, your attitude matters and you don’t have to look at these things as a hopeless situation. You can be very positive through the whole thing,” Lankes noted.  “The Boring Patient” is not a book about cancer, he said, but how Lankes “responded to being diagnosed, living with and being treated for cancer. That is an important distinction because cancer is not funny. Cancer sucks. Cancer does not teach, cancer does not preach, cancer does not comfort, or inspire or inform. Cancer kills. How one responds to cancer? That is a completely different matter.”

The book is meant “for others living through a journey with cancer” and “for those in the business of delivering health care,” the author said. It contains an important message: patients need to feel like they are a part of a team in their treatment. As Lankes observes, “Those in the medical profession talk a lot about being patient centered, much the way we in information talk about being user centered, and in the library world, being patron centered. What’s really needed is to put the person in the middle. I think that in all those fields, it requires a pretty substantial change in what it means to be a professional when you’re treating someone. The professions—librarians, lawyers, doctors, teachers … really need to shift their minds from being the experts on high to being part of a team.”

The professor received an amazing amount of support from everyone at the iSchool during the time of his diagnosis and treatment, he says. “The school was, and still is, amazingly supportive throughout this whole process. This is one of the reasons I love working here–just the amazing amount of support I received from everyone, staff, faculty, the dean, the provost … they really made it possible to make it through all of that.”

While the iSchool Professor and Dean’s Scholar for New Librarianship is known around the world for innovation in and advocacy for the library profession and institution, his candid online communication during his illness created many new acquaintances and virtual supporters who sent cards and pictures, and asked about his health and progress.

Previous books by Lankes include “The Atlas of New Librarianship”(which won the 2012 ABC-CLIO/Greenwood Award for the Best Book in Library Literature) and “Expect More: Demanding Better Libraries For Today’s Complex World,”a rallying call to communities to raise the bar, and their expectations, for great libraries. At the iSchool, Lankes also is the director of the Information Institute of Syracuse. He has been a visiting fellow at the National Library of Canada, the Harvard School of Education and the first fellow of the American Library Association’s Office for Information Technology Policy.

He is recognized for his co-creation of the AskERIC project (an online information clearinghouse) along with Michael Eisenberg and Nancy Preston, which began a long collaboration with the ERIC system and the U.S. Department of Education. As a researcher, head of AskERIC R&D, associate director and later director of the ERIC Clearinghouse on Information & Technology, Lankes explored the growth of the Internet. Within his ERIC work, Lankes created one of the first 100 web sites and the first web presence for CNN, the Discovery Channel, and the U.S. Department of Education.