Assistant Professor Yang Wang has been recognized with the Robert Benjamin Junior Faculty Achievement Award, an honor that showcases the demonstration of excellence and originality in research. 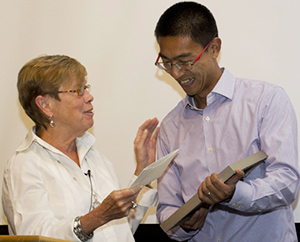 Dean Elizabeth D. Liddy presented the award at the School of Information Studies (iSchool)  annual faculty and staff convocation on Friday. Sept. 19. The honor has been given only three times: to Professor and Senior Associate Dean Jeffrey Stanton in 2003, the year it was established; to Associate Professor Scott Nicholson (2005); and to Associate Professor Carsten Oesterlund (2008).

Wang said he was surprised, humbled and honored by his selection, noting, “I cannot express how grateful I am to my wonderful and supportive colleagues here at the iSchool. I am lucky to be part of this amazing school, let alone receive this honor.” He expressed gratitude to those who nominated him and who support his research, listing his wife, Yun Huang, and Dean Liddy, plus the many faculty, staff members and students he has worked with. They include Eileen Allen, Jason Dedrick, Steve Sawyer, Jeff Stanton, Joon Park, Barbara Kwasnik, Kevin Crowston, Carsten Osterlund, Scott Nicholson, Milton Mueller, Huichuan Xia, Corey Jackson, Kevin Du, Kathy McDonald, Corey White, Meghan Macblane, Trish Lowney and Gina Lee-Glauser. He also noted how much he appreciated receiving a “heartwarming award letter,” which described the honor’s significance to originator Benjamin and his wife. “I felt the same way,” Wang said. “It means a lot to me and my family. Looking forward, I need to work harder to live up to the honor of this award.”

He currently is involved in two National Science Foundation-funded research projects. He is a principal investigator on a subcontract from Carnegie Mellon University, researching online privacy behavior and the effects of online “nudging” tools (Trustworthy Computing, 2013). He was just named a co-principal investigator on Spreading SEEDS: Large-Scale Dissemination of SEED Labs for Security Education, with Professor Wenliang (Kevin) Du, of Syracuse University’s College of Engineering and Computer Science. His role in that project is to evaluate the impact of efforts to bring Du’s security education workshops to larger audiences.

Professor Wang’s co-authored paper on how online processes are fraught with privacy concerns (Smart, Useful, Scary, Creepy: Perceptions of Online Behavioral Advertising), was recognized by the Advisory Board of the Future of Privacy Forum. He has received ACM CHI 2012’s Paper Honorable Mention award, given to only five percent of submissions. Additionally, Wang earned a Phi Beta Kappa International Scholarship in 2009 and a UCI Graduate Dean’s Dissertation Fellowship in 2009.

His Ph.D. in Information and Computer Science was completed in 2010 from the University of California, Irvine, and he earned his master’s degree there in 2005. At the iSchool, he is professor of record for IST 449, “Human Computer Interaction.”

Wang’s research looks at differentiated subjects connected by the intersection of user behavior and privacy and security issues. His earlier research, in software engineering, was “very systems-driven and all about the technical aspects,” so when he began his Ph.D. program, he sought a more multi-disciplinary focus. A course in human computer interaction sparked new interests, he said.

Examining privacy and security issues is important both for national security as well as for ordinary citizens, Wang believes. “There are a lot of tough issues and tough problems. For these problems to be solved, you can’t just use technical solutions, it has to be a multi-disciplinary approach. Tech science, computer science, public policy—all different kinds of areas are involved.”