Environmental advocate Van Jones will be the first guest of the University Lectures 2014-15 season at Syracuse University on Tuesday, Sept. 30. 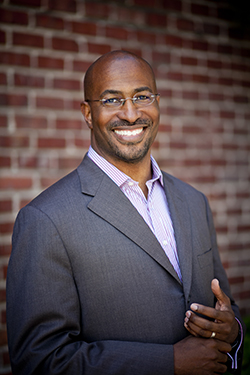 Jones’ presentation, “Green Jobs and Sustainability,” will begin at 7:30 p.m. in Hendricks Chapel and is free and open to the public. American Sign Language (ASL) interpretation and Communication Access Real Time (CART) are available.

Recently named a co-host of CNN’s “Crossfire” reboot, Van Jones is president and co-founder of Rebuild the Dream, a platform for bottom-up, people-powered innovations to help fix the U.S. economy. A Yale-educated attorney, Jones has written two New York Times Best Sellers: “The Green Collar Economy” (HarperOne, 2009), the definitive book on green jobs, and “Rebuild the Dream” (Nation Books, 2012), a road map for progressives in 2012 and beyond. In 2009, Jones worked as the green jobs adviser to the Obama White House. There, he helped run the inter-agency process that oversaw $80 billion in green energy recovery spending.

Jones is the founder of Green For All, a national organization working to get green jobs to disadvantaged communities. He was the main advocate for the Green Jobs Act, signed into law by President George W. Bush in 2007, the first piece of federal legislation to codify the term “green jobs.” Under the Obama administration, the Green Jobs Act has resulted in $500 million for green job training nationally. Jones had also worked in social justice for nearly two decades and is the co-founder of two social justice organizations—the Ella Baker Center for Human Rights and Color of Change.

Jones’ lecture is the first in the 2014-15 series. Other guests during the fall 2014 semester include Eve Ensler, Tony Award-winning playwright, performer and activist and author of “The Vagina Monologues” (Oct. 15); Carrie Mae Weems, artist, photographer, storyteller and MacArthur Fellow (Oct. 28); and Barry Scheck, attorney, DNA expert and founder of The Innocence Project (Nov. 11).

To recommend a speaker, or to obtain additional information about the University Lectures series, contact Esther Gray in the Office of Academic Affairs at 315-443-2941 or eegray@syr.edu.