Syracuse University Vice Chancellor and Provost Eric F. Spina today named Chilukuri K. Mohan interim dean-designate of the College of Engineering and Computer Science. A faculty member at the University for more than 25 years, Mohan has served as chair of the Department of Electrical Engineering and Computer Science since 2009. Mohan will assume the role of interim dean on Jan. 1, 2015, succeeding Laura J. Steinberg who, after a semester-long sabbatical, will assume a university-wide leadership role in July 2015. 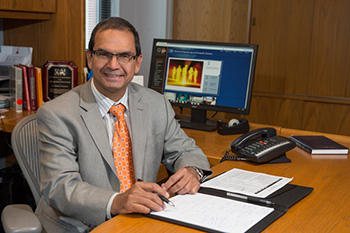 “Chilukuri Mohan’s extensive leadership experience and outstanding contributions as a scholar, researcher and teacher make him ideally suited to serve as interim dean of the College of Engineering and Computer Science,” says Spina. “Throughout his tenure, he has reached across departments, disciplines and institutions to spur student research and programming opportunities that address rapidly expanding realms of scholarship. He is widely respected among faculty and staff alike, and is known for his integrity and earnestness. He will be an effective and deeply collaborative leader who will work tirelessly with faculty, staff and students to further advance the college as a place of deep learning and innovation.”

Under Mohan’s leadership there has been significant advancement of the Department of Electrical Engineering and Computer Science. Research expenditures have doubled, the number of National Science Foundation CAREER award winners increased from one to six and numerous new research efforts have been launched. EECS students and faculty have had many accomplishments and won notable awards in recent years.

Additionally, Mohan has helped establish new interdisciplinary B.S./M.S. programs, supported the launch of three online M.S. degrees and has worked to strengthen relationships with such strategic partners as JPMorgan Chase and the Air Force Research Lab (AFRL). Through his department’s collaboration with the iSchool, a joint B.S. program in systems and information science was developed.

“I am honored to lead our college faculty, staff and students during this period of great promise, as we work toward excellence in education and research, says Mohan. “We are well positioned to extend national prominence, thanks to our world-class faculty, staff members whose efforts have been critical to our student success, and the strategic leadership of Dean Steinberg.  As engineers and computer scientists, we model, design and build physical and computing systems that transform every aspect of our world. And we do so by interacting with faculty, students, and professionals from multiple disciplines, by understanding the needs of society, and by applying mathematical and scientific principles with rigor and integrity. We are Syracuse, and we mold the shape of tomorrow’s world.”

As a researcher, Mohan has made considerable contributions to several topics within the field of artificial intelligence, with current focus in social network dynamics. He has collaborated with University colleagues in multiple other disciplines, and currently applies his expertise to areas that include cybersecurity, bioinformatics and hydrodynamics. He is the co-editor-in-chief of a journal and serves on several conference committees. He has co-authored two books and about 190 papers and articles that have appeared in various journals and conference proceedings; he has also co-edited three books and advised/co-advised 23 Ph.D. students. His pioneering works include the first mathematical analysis of particle swarm optimization and several algorithmic innovations in artificial neural networks and evolutionary algorithms.

Most recently, he led a team of six academic institutions in the development of Smart Grid curricula, including the establishment of a state-of-the-art Smart Grid and Power Systems laboratory at Syracuse University, funded by the U.S. Department of Energy.

Mohan holds a Ph.D. from the State University of New York at Stony Brook and an undergraduate degree from the Indian Institute of Technology at Kanpur. At Syracuse University, he has developed and taught many courses in computer science, and considers the success of his students to be his greatest accomplishment.  He has been an active member on several college and University-wide committees, and served as chair of the Senate budget and fiscal affairs committee from 2008-2010.