For the last three years, Amy Criss, associate professor of psychology in Syracuse University’s College of Arts and Sciences, has served on the board of the Society for Mathematical Psychology. Earlier this month, at the society’s annual meeting in Québec, that 250-member organization elected Criss to serve as its next president, a position Criss says she is proud to accept. 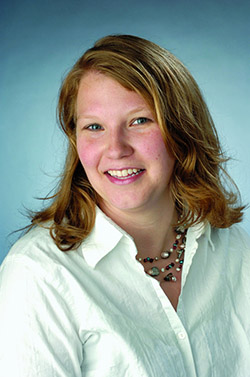 “The society has a rich history and I’m honored that the board has entrusted me to lead this esteemed organization,” says Criss, who joined the Syracuse University faculty in 2007. “My predecessor, Mark Steyvers of University of California, Irvine, has done fantastic work on behalf of the society and I am looking forward to building upon his successes.”

Most recently, Criss served as vice president of the group, which promotes the advancement and communication of research in mathematical psychology and related disciplines. Mathematical psychology includes work of theoretical character that uses mathematical methods, formal logic and computer simulation to better understand changes in human thought and behavior across a wide range of psychological fields. As president of this organization, Criss will be responsible for a number of key initiatives, including overseeing the execution of the annual meeting, which will be held in Orange County, Calif., next year.

“Amy is a terrific educator and a phenomenal researcher,” says Peter Vanable, professor and chair of psychology. “I’m certainly not surprised the Society for Mathematical Psychology has tapped her as its next leader. She brings a level of energy to her work that has enabled her to accomplish great things in a very short amount of time. We couldn’t be more proud of her.”

Criss, an expert in cognitive psychology, earned a Ph.D. from Indiana University in 2004 and completed a postdoctoral fellowship at Carnegie Mellon University’s Center for the Neural Basis of Cognition. A frequent contributor to scholarly and scientific publications, Criss has had articles published in the Journal of Memory and Language, Psychological Science, Cognitive Psychology, and the Journal of Experimental Psychology: Learning, Memory and Cognition, just to name a few. In 2010, Criss received a five-year, $440,000 National Science Foundation (NSF) Early Career Development (CAREER) Award, a prestigious recognition that is allowing her to further study episodic memory. She’s using the CAREER grant to develop a series of laboratory experiments and a computational model designed to evaluate three critical components of episodic memory: memory cues, the content of memory that is recalled independent of cues and how content recall and cues interact.