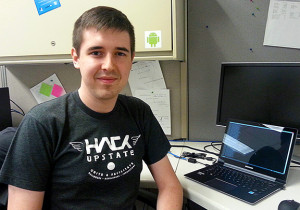 Carter Yagemann, a senior in the computer science program from Jupiter, Fla., spent his summer crawling the Android operating system as part of the Department of Electrical Engineering and Computer Science’s Research Experience for Undergraduates (REU) program.

Q: How did you learn about the REU program?

A: I was actually a student in one of Professor (Kevin) Du’s classes and I had been doing internships in the private sector. I started as a web developer for Frontier Communications and then I worked for JPMorgan Chase in some of their security areas. I wanted to gain as much exposure as I could, so I was interested in getting into research. I approached Professor Du and he gave me an offer to do research under him.

A:It’s been a lot of fun. It’s been nice to pursue what I’m interested in. There’s a lot less red tape and hurdles when you’re doing research versus in the private sector where there is a lot of regulation and accountability. It was really fun, really educational. I get to be with my peers, people more my age. I can mostly do what I want.

One of the things that is very different with research is that it’s very open ended. You don’t really know what’s going to get traction and what’s going to turn out to be impossible. It’s very free flowing and very flexible. The professors give you some ideas of where to start and you go from there to see if it works or not.

Professor Du was definitely interested in the intent firewall, but most of my research is my own work. I made all of the documentation and the website. I’m the one who crawled all the source code. He was the one who gave me the idea and I took off with it.

Q: Why did you choose to come to Syracuse University?

A: I was choosing between here and Drexel University and I wasn’t sure that I wanted to be in a big city like Philadelphia. I picked Syracuse because there’s a nice atmosphere here. It’s a condensed campus, and there’s a lot going on. It’s a nice place to be.

Q: What do you plan to do with your degree in computer science after you graduate?

A: I definitely want to continue to pursue cybersecurity. Right now I am looking in multiple places. I’m looking at what’s going on out in Silicon Valley and what’s going on with the government.

I am also interested in being an entrepreneur. I have started writing some applications and I have pushed some out to the Google Play Store. I’m kind of a one-man app dev company. I’m definitely interested in getting out there on my own or with friends and talented people. On the other hand, large companies tend to have the resources to be able to do some pretty interesting things.

I just want to go where the interesting work is–something I haven’t seen before. I’m really open. Part of the point of this research was to try to find where I’m happiest.

About the Electrical Engineering and Computer Science REU
The Department of Electrical Engineering and Computer Science hosted its annual REU program this summer. It culminated with a half-day of presentations in July in which seven REU students from four different universities, including SU, Cornell, SUNY Fredonia and the University of Illinois at Urbana-Champaign, completed research on a range of topics.