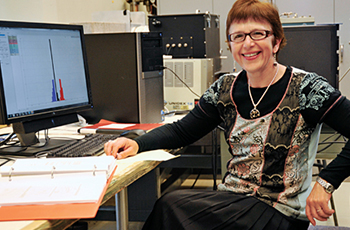 “To be recognized by the NSF on such a large scale is truly an honor,” says Artuso, the project’s principal investigator. “The goal of the new detector, which will be made of silicon crystals processed in such a way as to measure the direction of charged particles with a precision comparable to the size of a human hair. It is a rare opportunity to embark on such an ambitious construction project that includes several technological innovations, in a university laboratory. This is not only a unique research opportunity, but a fantastic teaching tool to expose our students to innovations in mechanics, electronics and position sensing devices.”

The CERN Laboratory is home to the world’s highest energy collider, the LHC, which collides eight trillion electron volt protons head on. The collider, which has enough energy to produce new, as yet undiscovered, fundamental particles, is the centerpiece of the Syracuse team’s research.

Artuso says the expectations of LHCb are unprecedented. “Our job is to look for new phenomena, giving evidence for ‘physics beyond the standard model,’ or ‘physics beyond what is known.’ Though we have our work cut out for us, the potential exists to discover the unknown.”

LHCb is composed of roughly 10 different sub-detectors or sub-systems. The Syracuse group is leading the construction of the UT, while working in collaboration with scientists from a number of other institutions, including the University of Maryland, University of Cincinnati and Massachusetts Institute of Technology. In addition to the U.S. team, groups from Zurich, Milan, Krakow and Geneva participate in the project.

“The members of the Syracuse High Energy Group have been international leaders for many years,” says Alan Middleton, chair and professor of physics. “Their dedication, experience and creativity have been evident in the design of complex experiments and in deep data analysis. I congratulate them on the opportunity to build and install this advanced apparatus: it is a pre-eminent contribution to accomplishments in the College of Arts and Sciences.”

This five-year construction project will get under way soon. The UT will allow LHCb to accommodate higher data rates in order to search for “new physics” beyond the standard model of particle physics. For the Department of Physics, this project will include the construction of new clean room facilities for assembling new detector elements and will involve a large number of graduate and undergraduate students, as well as other researchers.