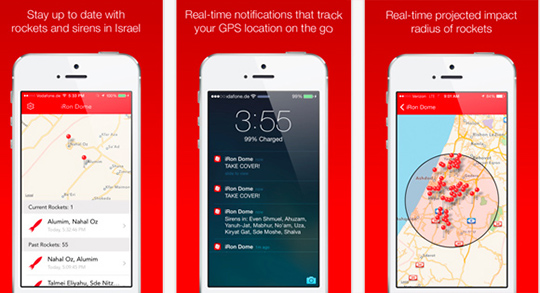 Last year, Benjamin Honig, a senior at the School of Information Studies (iSchool), won a scholarship award from Apple that provided him with admission to the company’s yearly Worldwide Developers Conference (WWDC) in San Francisco. While attending the WWDC in June, Honig met Arik Sosman, a student studying in Germany who was also an Apple Scholarship winner. The two became friends and stayed in touch through Facebook.

Sosman, studying at Leibniz University in Germany, is originally from Israel, and Honig, from New Jersey, grew up with a strong Jewish faith.

“As we stayed in touch, we found we both had a special connection to Israel,” Honig says.

It was no surprise, then, to Honig, given the current crisis in the Middle East, when Sosman contacted him two weeks ago with an idea.

“He wrote to me and asked if I would be willing to work with him on an app that helped to detect rockets being launched into Israel,” Honig says.

Honig immediately replied, and dropped everything else he was working on to help Sosman develop the app.

“I thought that if I devoted all my time to it, we’d be able to bang it out over a weekend,” Honig says.

The pair began their work, with Sosman handing over the code before he went to sleep in Germany to Honig, who would pick it up when he awoke in New Jersey. “We were basically working on it non-stop,” said Honig. “I’d push the code to GitHub and Sosman would take over, make his changes and improvements and push it back to me.”

After a few days, the pair had a working app, iRon Dome, named after the air defense system in Israel that intercepts rockets fired into the country by Hamas. The first version of the application was pushed to the iOS App Store last Tuesday, and was made available for users to download. 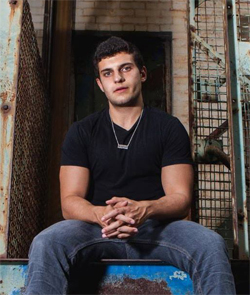 Although a mobile app called Red Alert, was already available to warn Israelis of rocket attacks, it did not allow users to customize their current location, or use GPS location data for alerts. iRon Dome actively tracks a user’s location in Israel and provides nuanced alerts based on real-time location and rocket information.

“Our application is about 30 seconds faster than Red Alert,” notes Honig, “and it tracks your GPS location at all times when the app is open—if a rocket has been predicted to land within your area, a ‘take cover’ alert is generated.”

The iRon Dome application also provides a map of rocket attacks, something the Red Alert app does not currently offer.

Honig did most of the code work for the iOS side of the application, including the user interface and design elements, and Sosman handled much of the server work, including querying and parsing the rocket data coming from Israel’s various data streams.

“My coursework at the iSchool was helpful when it came to the information security portion of this app,” Honig says. “Mainly in the hoops we had to jump through to get the data from the Israel’s Home Front Command Center, it was important to understand how to keep the data transfer secure, to ensure we could keep their data available to us.”

An upgrade to the app, version 1.1, is currently in review with Apple’s App Store, and another upgrade, version 1.2, that enhances settings for notifications, should be available next week.

The application is free to download, but relies on advertisements, placed in the settings portion of the app, to help defray server costs.

“The ads are there only to offset our server costs,” Honig says. “Anything that we make over our costs will be donated directly to an IDF fund.”

Honig has been coding iOS applications for several years, since taking a Java course while in high school, and then teaching himself the Objective C language. He published his first app in the App Store while he was still in high school.

“I enjoy making games, anything that will sell and be fun to play, or apps that others find useful,” said Honig. Before the iRon Dome app, Honig’s most recent App Store venture was a game called Avoid Shooting Stars.

This summer, Honig is interning at Perka, a company that has developed a mobile customer loyalty platform. He is working on iOS applications for the company, as well as his own iOS apps during his spare time.

As for life after Syracuse, Honig is currently weighing his options.

“I’ve been fortunate to receive some offers from companies already,” Honig says. “But I’m also interested in the startup life. I just have to figure out where I want to be.”

“With more than a million apps in the app store, there cannot be many that are built to help save lives,” says iSchool faculty member Jeffrey Rubin. “It is incredible to see an app built by an iSchool student that uses technology in such a positive manner.”