Chemist to Use NSF Grant to Bolster Study of Materials Chemistry, Nanoscience

A chemist in the College of Arts and Sciences has received a major grant to study the synthesis of stainless nanoparticles. 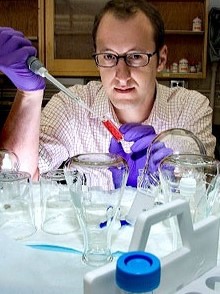 Mathew M. Maye, associate professor of chemistry, has been awarded a three-year, $360,000 grant from the National Science Foundation (NSF). The award supports his ongoing work with metal stainless alloy nanostructures, the results of which may impact gas storage, heterogeneous catalysis and rechargeable lithium-ion batteries.

Maye’s approach is novel, in that he is attempting to chemically synthesize nanoparticle alloys that resemble steel and stainless steel.

“We’re all aware of the basic properties of stainless steel,” says Maye, citing shiny, rust-resistant kitchen metal surfaces as an example. “At the nanoscale, this rusting—or oxidation, as it’s called—is difficult to stop. By synthesizing stainless interfaces, we hope to better protect nanoparticles from oxidation.”

An alloy is a mixture of metals whose properties are different from those of its individual elements. When carbon is added to iron, the result is steel that is strong and hard. Mix in chromium and nickel, and the steel becomes stainless, or rust-proof.

Maye’s work utilizes nanoparticles that contain iron cores and thin shells, the latter of which are made up of chromium, nickel, aluminum or titanium. He has developed the chemistry to produce these materials, which are then exposed to heat and oxygen, allowing for control of alloying and oxidation.

Maye says that, like any good project, the new materials’ properties were discovered by taking a novel approach.

“Our preliminary studies showed that a nanometer-thin layer of oxide can be used to protect the nanoparticle, while providing a new mechanism to control nanoparticle structure and reactivity,” says Maye, whose research team includes postdoctoral fellows, as well as graduate and undergraduate students. “As a result, we can make atomic to nanoscale voids, which are holes in the particle about the size of a molecule. These voids can be used to trap and store gas, such as carbon dioxide, and to serve as electrodes in lithium-ion batteries.”

Maye says the goal of the NSF project is three-fold: to develop “wet-chemical” synthesis strategies to prepare the alloy nanomaterials; to understand their oxidation and phase behavior; and to use such behavior to construct novel structures.

“We’re really excited about NSF’s support,” he says. “The grant allows my team to prepare materials that have not been made before and to uncover important fundamental science related to nano alloys.”

In addition to underwriting research, the NSF grant will serve a broader impact by supporting an annual workshop that brings together regional leaders in nanoscience. The first such “Upstate Nano” workshop will take place next summer at Syracuse University.

“There is some tremendous nanoparticle research going on in the region,” Maye says. “The workshop will enable creative researchers to discuss ideas, while exposing students to the novel science and great potential of our field.”