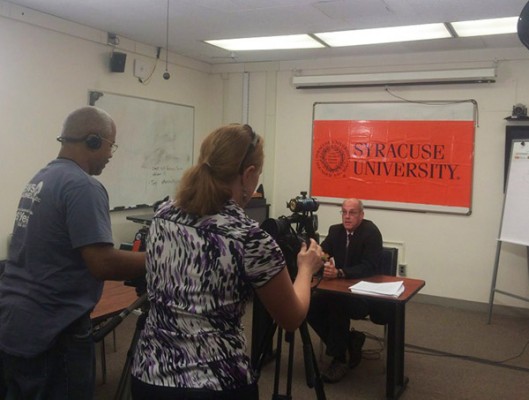 Charles Driscoll, University Professor of environmental systems engineering, found himself answering a lot of questions this week. The questions were from members of the media, waiting to report on Driscoll’s reaction to newly proposed EPA emissions guidelines for nearly 2,400 power plants nationwide. Driscoll’s comments were carried by TV, radio, print and internet news sites. This video highlights the research he conducted with Harvard University, showing the health benefits of carbon emissions reduction.

Here’s a transcription of the video:

“The federal government is taking steps to confront climate change. This week President Obama announced a proposal to reduce carbon emissions by power plants by 30 percent by the year 2013. Researchers from Syracuse and Harvard Universities have studied the possible environmental and health impact of such cuts. They also say strong standards for carbon emissions from power plants will have an added benefit: reductions and other air pollutes that make people sick, damage forests, crops, lakes, fish and wild lives.

“That’s why it is a win-win situation for entire United States. Because every state in US will derive some benefits.”

Professor Charles Driscoll from Syracuse University is the co-author of its first kind of study.

“I think the take home message is that this standard is design to reduce carbon dioxide, which contributes to climate change. That’s a very broad problem. But in addition to that, our study shows that it will reduce other pollutants. Pollutants that influence air quality. And it will associate benefits locally. If you look at the map, you can see brownish color shows the states with great benefits. So not surprising, there is OH, PA, WV, that’s where power plant located. But if you look more broadly across the whole country, you can the yellow and the orange east of the country, and also areas of western states. So pretty wide benefits.

Researchers say there is real chance to reverse decades of damage for power plants, along with human benefits, too.

It basically accomplishes two things. It accomplishes decreases in carbon dioxide emissions. So really starts to get serious about climate change problems. Plus, local benefits, associated with improvements in air quality, human health, and benefits to our local eco system.

Much of what’s contained in power plant emissions can lead to increased cases of asthma and heart disease. Researchers looking into the impact on health and related costs will release that study later this summer. Keith Kobland, SU news.”