Professor Scott Pitnick, a highly accomplished evolutionary biologist in the fields of sexual selection, reproductive genetics and speciation, has been appointed the inaugural Weeden Professor in the College of Arts and Sciences. The professorship, appointed by the dean, will support the activities, research and teaching of the Weeden Professor. It was made possible thanks to the generosity of Morris “Mike” Skiff Weeden ’41 and his wife, Jane, both of whom passed away in 2013. 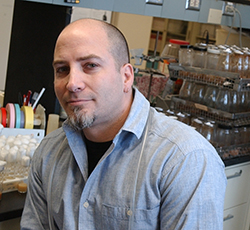 “The Weedens loved SU and were extraordinary benefactors of the College of Arts and Sciences,” says George M. Langford, dean of the college. “I consider myself fortunate to have spent the time I did with them during my tenure as dean. It’s people like Mike and Jane that make the college such a special place. They were committed to academic excellence, research and providing the best experience to our students. This professorship will significantly enhance the resources available to Professor Pitnick and allow him to achieve that next goal that may seem out of reach. I congratulate Scott on this exciting honor, and wish him well as he continues his outstanding research projects.”

Pitnick, who joined the college in 1996, has been awarded more than $3 million in research grants since his arrival at Syracuse. Pitnick’s articles have been featured in some of the most highly respected scientific journals, including Nature, Science, Current Biology, Proceedings of the National Academy of Sciences USA and Biological Reviews. Recent contributions by Pitnick and his colleagues have revolutionized the understanding of reproductive competition and the maintenance of species boundaries. Their findings have major implications for understanding biodiversity and the fundamental nature of sex differences and sexual conflict.

Ramesh Raina, chair of the biology department, says Pitnick’s record is highlighted by the quality and scope of his scholarship. “Scott is a leader in his field and enjoys widespread recognition for his exemplary work on sexual selection and evolution. He is an empathetic, compassionate scholar and highly regarded among his colleagues,” Raina says.

Pitnick earned a Ph.D. from Arizona State University in 1992 and completed a National Science Foundation postdoctoral fellowship in 1994. He says this professorship is the greatest honor of his career.

“Syracuse University has challenged, cultivated and inspired my creativity and scholarship for the bulk of my career.  To now receive this wonderful recognition is both thrilling and humbling,” Pitnick says. “To know that Dean Langford and a committee of my peers selected me as the inaugural Weeden Professor out of dozens of qualified candidates reinforces my commitment to the college, my research and the dedicated students I have the pleasure to teach every day.”

A former captain in the U.S. Army, Weeden received a B.A. in political science from the college before going on to receive an M.B.A. at Harvard Business School. A lifetime trustee of Syracuse University and a member of the college’s board of visitors, he and his wife were generous supporters of Syracuse University. Weeden held executive positions at Bristol Laboratories and Morton Thokol, before finishing his career as a business consultant in the health-care industry. He also served as the president of the National Alumni Association and was once chair of the Corporate Advisory Council.