A chemist in the College of Arts and Sciences will be presented with a lifetime achievement award from the Germany-based BASF Corp., the world’s largest chemical company. 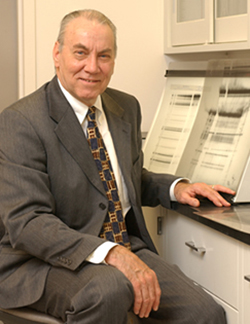 In June, James Dabrowiak, professor of chemistry, will receive the International Precious Metals Institute (IPMI) Henry J. Albert Award, recognizing his outstanding theoretical and experimental contributions to the science and technology of precious metals. He will be honored at a special ceremony in Orlando, Fla.

“All of us in the Department of Chemistry and the College of Arts and Sciences are extremely proud of Professor Dabrowiak,” says Karin Ruhlandt, Distinguished Professor and chair of chemistry, as well as the college’s interim dean-designate. “He is a consummate scientist-teacher whose career-defining work in bioinorganic chemistry and metallo-pharmaceuticals has kept us in the international spotlight, while making a difference in people’s lives.”

Dabrowiak made headlines two years ago, when he was recognized with IPMI’s Faculty Advisor Award, and in 2011, when he and a team of researchers figured how to use DNA-capped gold nanoparticles to kill cancer cells. Much of his work in the latter was done through the Syracuse Biomaterials Institute, where he also serves as a faculty member.

“Since each nanoparticle can carry hundreds of drug molecules, the vehicle can deliver high payloads of toxic anticancer drugs to tumor sites,” says Dabrowiak, whose drug-delivery platform was recently patented. “This is part of my overall research agenda, involving the use of precious metal compounds as anticancer agents.”

Dabrowiak has made a career out of studying how precious metals may be used to treat disease. In 2009, he wrote  “Metals in Medicine” (Wiley), considered a primer for anyone interested in inorganic chemistry and medicine. The book grew out of not only a course he developed at Syracuse University by the same name, but also his years as a sought-after metal chemistry consultant.

Early on, Dabrowiak served as a consultant for Bristol-Myers Squibb, a pioneer in the development of platinum anticancer drugs. These days, he is just as comfortable in front of a classroom as he is in the lab.

“I’ve spent most of my career educating students and the scientific community about the importance of precious metals,” says Dabrowiak, who has more than 150 scholarly articles and 400 conference presentations to his name. “Lately, I’ve been focusing on how platinum-containing drugs interact with components in the blood and affect cancer cell respiration.”

A former scholar of the American Cancer Society, Dabrowiak earned a Ph.D. from Western Michigan University and completed post-doctoral work at The Ohio State University.