To say the competition for the 2014 International Human Frontier Science Program Organization (HFSPO) Research Grants was fierce would be a massive understatement.

In fact, when the process began more than a year ago, 844 letters of intent were submitted from researchers all over the world. Applicants went through a rigorous year-long selection process and when all was said and done, only 34 submissions were selected to receive awards.

Ten awards were given to Young Investigator teams, while 24 program grants were handed out. Among this year’s program grant recipients is an intercontinental team, consisting of Katharine Lewis, associate professor of biology in The College of Arts and Sciences; Claire Wyart of The French Brain and Spine Institute ; and Aix Marseille University’s Patrick Delmas. 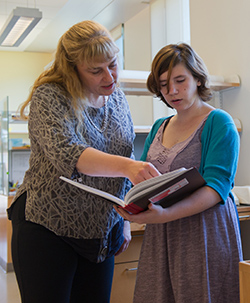 Roughly $35 million will be awarded to this year’s recipients. HFSPO collaborative research grants are given for a diverse array of projects under the umbrella theme of “Complex mechanisms of living organisms.” According to the HFSPO, particular emphasis is placed on cutting-edge, risky projects.

Lewis’ team will use the grant to study a special class of nerve cells that are located along the central canal of the spinal cord and that contact the cerebrospinal fluid (CSF). Though these nerve cells were first identified almost a century ago, Lewis says very little is known about exactly what they do or how they are made.

“The CSF fluid constitutes a dynamic interface through which the nervous system can detect and receive chemical and mechanical cues reflecting internal physiological states,” says Lewis. “With this grant and in collaboration with my partners in France, we hope to establish how genetic networks specify these fascinating cells and unravel the molecular mechanisms by which CSF-contacting nerve cells (neurons) are physiologically activated and contribute to behavior. We also hope to gain a better understanding of how chemical and mechanical cues produced in the brain are communicated to neurons within the spinal cord. This collaboration will use exciting new interdisciplinary approaches to investigate these crucial questions and fundamental gaps in our knowledge and I’m thrilled and proud to be a part of it.”

Lewis, who previously served as a Royal Society University Research Fellow at the University of Cambridge, joined SU’s Department of Biology in 2010. Her research interests include the specification and patterning of spinal cord interneurons; the formation of functional neuronal circuitry; and the evolution of spinal cord patterning and function. She earned a Ph.D. from University College London and went on to continue her postdoctoral studies at the University of Oregon.

“From the day she arrived on campus, Kate has been a powerhouse researcher,” says Ramesh Raina, professor and chair of the Department of Biology. “This award is a testament to her hard work, dedication to her research and relentless efforts to understand the inner workings of the spinal cord. Not only is it an honor to have her on our team, but it’s also a pleasure to watch her evolve as an educator and researcher. Her curiosity is as inspiring as her ability to pursue the unknown.”