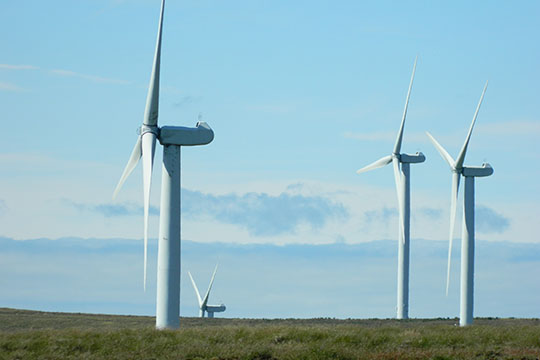 The costs of using wind energy and natural gas for electricity are virtually equal when accounting for the full private and social costs of each, making wind a competitive energy source for the United States, according to a new study on the federal tax credit for wind energy. 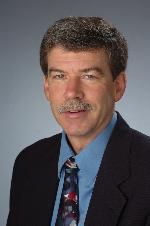 Just released by researchers at Syracuse University and the University of California, the analysis shows that wind energy comes within .35 cents per kWh when levelized over the 20-year life of a typical wind contract, compared on an equivalent basis to the full costs for natural gas-fired energy, according to Jason Dedrick, associate professor at the School of Information Studies (iSchool).

“The true costs of electricity from wind power and natural gas are effectively indistinguishable, yet because the cost of carbon emissions is not included in the market price of gas, wind has not been a competitive form of energy use in most of the United States, without government pricing support,” Dedrick says.

The analysis starts from the U.S. Department of Energy (DOE) estimates of the lifetime “levelized” cost of electricity from a new wind farm, and also from an advanced combined cycle gas plant. The analysis develops a new metric that incorporates long-term factors that are not included in the DOE numbers. Accordingly, the study also reveals that the recently expired Production Tax Credit for wind makes up for the lack of any mechanism to make fossil fuel generators pay for the cost of carbon emissions, Dedrick notes. 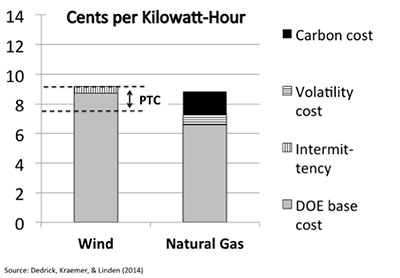 Current national-average estimates from the DOE are 8.7 cents per kilowatt-hour (kWh) for wind and 6.6 cents for gas-fired energy—making gas appear as a much cheaper alternative, Linden notes. Incorporating the new metric into the analysis, however, shows that the tax credit “is actually compensating for a market failure to price the future cost to society of carbon emissions,” Linden explains. “In the absence of a carbon tax, the PTC can serve as a stand-in to make the market reflect the true costs of energy.”

The study incorporates these aspects:

The components of the adjusted levelized cost, reported here as averages, are actually estimates that fall in a range, Linden notes. “The result is even more favorable for wind if you consider some of the larger possible values for carbon emissions,” he says.

Further details can be found in a brief working paper available at http://ischool.syr.edu/media/documents/2014/3/PTC32514.pdf.

Dedrick notes that while the amounts discussed here are averages, the costs of wind and gas vary considerably across the United States. The price difference between wind and gas power is actually less than 1.6 cents per kWh in many regions of the country, “and that is where the PTC will have its impact,” he says.

The question of whether the federal government should support wind energy has been debated by Congress for more than two decades, at least since the PTC was created in 1992, according to Kraemer. He says the credit has been implemented in an on-again/off-again fashion, expiring five times since then. Until now, the tax credit has always been renewed for another year or two. This year, Kraemer said, President Obama’s proposed budget for the Department of Energy calls for permanently extending the PTC, at a cost of $19.2 billion over the next 10 years.

Dedrick suggests that “since the levelized value of the PTC happens to be very close to the average estimated cost of carbon from a natural gas plant, a long-term extension of the PTC would have a similar effect to a carbon tax in terms of the relative price of electricity from wind and gas.”

He adds, “Given the ranges of the estimates for each of the costs involved, our research shows that the true cost of electricity from wind power and natural gas are effectively indistinguishable. Yet, because the cost of carbon emissions is not included in the market price of gas, wind is not competitive in most of the U.S. without government support. An alternative would be to create a pricing mechanism for carbon emissions, either through a carbon tax or cap-and-trade scheme. However, neither of those options seems likely in the current U.S. political environment.”