For Elizabeth Kahn, being president of Students of Sustainability at Syracuse University is not just a campus commitment. A few weeks ago, Kahn spent her weekend in Washington, D.C., with 12 other students in the organization to protest the proposed Keystone XL oil pipeline.

She raises her voice so that others might understand what she is so passionate about.

“The word sustainability flies over people’s heads. They hear it, but don’t know what it means,” says Kahn, a junior advertising major in the Newhouse School. 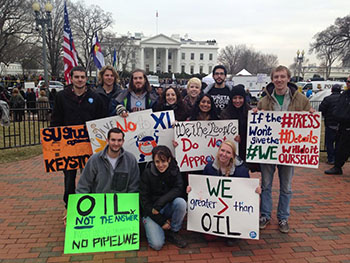 Twelve members of Students of Sustainability gathered in Washington, D.C., in February for one of the largest student-led protests against the Keystone XL pipeline project.

Students of Sustainability (SoS) is a relatively new organization with the goal of creating a more conscious campus in terms of what students are consuming, what waste they are producing and how closely connected consumption and waste are.

In fact, Kahn pointed out the irony of the organization driving down to the nation’s capital, burning fuel, to protest the Keystone XL pipeline, a proposed oil line from Alberta, Canada, to refineries in Texas. “We’re driving a car to go protest on the use of oil,” Kahn says. “It’s all interconnected; we’re so dependent.”

SoS formed from a smaller environmental organization on campus: Eco-Reps. Kahn thought the name Eco-Reps wasn’t clear to students and wasn’t drawing in many members. Kahn re-founded the organization as Students of Sustainability at the beginning of this semester.

Melissa Cadwell, marketing manager in the sustainability division, is the advisor for SoS. The division partners with the student organization to help get its message out on campus. The group now has about 30 core members and continues to grow.

But SoS is not the only student sustainability organization growing on campus. The U.S. Green Building Council (USGBC) Students Group at SU started in December 2011 and has since been helping students get a head start in careers within sustainability design and structure.

USGBC Students Group aims to increase student knowledge of LEED and green design and sustainability on campus. The group’s biggest goal is helping students prepare for and pass the LEED green associate—a test that certifies professionals in LEED (leadership in energy and environmental design) and allows them to become LEED-accredited professionals.

This opportunity provided by the USGBC Students Group is unique in that it allows students to become certified LEED green associates before graduating.

Growing up in the ultimate urban design spaces and buildings of New York City, USGBC Students Group President Sheryl Owen knew she wanted to study civil engineering. (She is a student in SU’s College of Engineering.) The city influenced her to be involved in city design and green planning.

“I’ve always wanted to do green design. It’s a passion of mine to help society any way I can,” Owen says.

The USGBC group is small, but the 20 students who are involved are active and interested in sustainability, says Owen. Members help each other prepare for the LEED associate exam, as well as attend conferences, such as the Green Bill Conference in Philadelphia, an exposition on new sustainability and LEED practices and technologies.

Earlier this semester, the group also toured the Gateway, a new campus building at SUNY ESF that generates its own power and uses renewable energy. Eight members in the USGBC Students Group are also attending the 12th annual Green Building Conference in New York State at the Oncenter in Syracuse March 27-28.

“Hopefully one thing we can do is get students involved, to educate them about LEED,” Owen says.

Both Students of Sustainability and the USGBC Students Group are always looking for new members to join and encourage interested students to like their Facebook page.