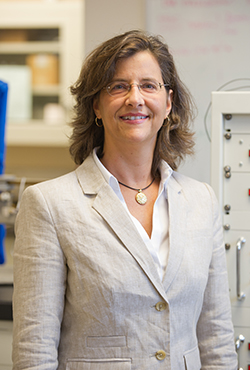 Professor Suzanne L. Baldwin, a renowned geologist and thermochronologist, has been named the inaugural Michael G. and Susan T. Thonis Professor of Earth Sciences in The College of Arts and Sciences.

Through the generosity of Michael Thonis ’72 and his wife, Susan, the newly established professorship will provide additional support for Professor Baldwin’s research program.

Baldwin’s laboratory conducts experiments on minerals and rocks to determine the thermal evolution of the Earth’s lithosphere and planetary materials. To conduct her studies, Baldwin collects rock samples from around the world and beyond, including from Papua New Guinea, New Zealand and the moon (Apollo 16 and 17).

“Suzanne epitomizes excellence in science,” says George M. Langford, dean of The College of Arts and Sciences. “Not only does she perform cutting-edge research with a talented team of researchers, she’s also committed to education, and our students benefit from her outstanding accomplishments in the field of petrology. We are thankful to her for paving the way for future scientists, especially aspiring female scientists, and I am pleased to appoint her the inaugural Thonis professor.” 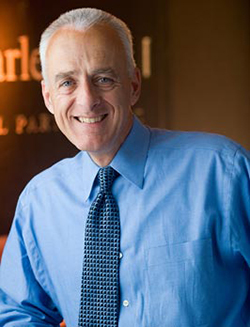 Mike Thonis, who majored in geology while a student at SU, is co-founder of Charlesbank Capital Partners in Boston and serves as a managing director and chief marketing officer. Thonis, who loves petrology (the study of rocks), says the college played a huge role in his life’s trajectory. “SU, and specifically the college, treated me with great respect when I was a student. I came from a rural part of New England, where education wasn’t always a priority,” Thonis says. “SU accepted me, gave me a scholarship and encouraged me to take the best courses with the best professors.”

While pursuing a Ph.D. at MIT, Thonis changed career paths and began focusing on finance, but his love for Earth sciences never went away. “I’ve been passionate about Earth sciences since I was five, when my mom read me a Dr. Seuss book about an underground river. Sadly, most Earth sciences departments are underfunded, so I am doing what I can to help SU’s department,” he says.

Baldwin, who was selected by Dean Langford, will hold a 10-year term as recipient of the Thonis professorship. Though he says he went out of his way to keep his opinions to himself during the selection process, Thonis couldn’t be happier with the dean’s decision. “Honestly, she [Baldwin] was my pick from the very beginning,” he says.

“I am truly honored to be recognized for my commitment to Earth sciences and humbled to have been selected the first ever Thonis professor,” says Baldwin, who holds a Ph.D. and master’s degree from the State University of New York at Albany. “It is especially an honor for me because I know Mike Thonis and he has been a great supporter of SU’s Earth Sciences department. This endowed professorship will allow me to combine my love of educating students with my passion for research and to provide new opportunities for my students and research group.”

Since joining the Earth sciences department in 2000, Baldwin has earned a host of awards. In addition to being named a Geological Society of America Fellow and an inaugural Marie Tharp Fellow at the Earth Institute of Columbia University, in 2010 she was awarded SU’s prestigious Chancellor’s Citation, which recognizes outstanding contributions in scholarship, research, teaching and creative work. Baldwin is also a member of the American Geophysical Union, Geological Society of America, the Association of Women Geoscientists and Women in Science and Engineering. Her work and research have been featured in hundreds of publications.