Student Team Advances to Second Round of Cyber Defense Competition 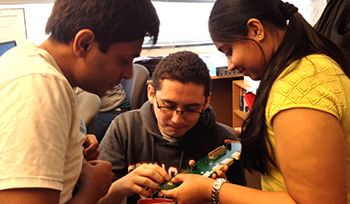 Graduate student Jose Bejar, center, helps two students with a project in the CCENT lab. Bejar is part of a student team competing in the National Collegiate Cyber Defense Competition.

A team of students from the Center for Convergence and Emerging Network Technologies (CCENT) cyber security test bed at the School of Information Studies (iSchool) is advancing to the second phase of competition in the Northeast regional section of the National Collegiate Cyber Defense Competition.

This is the second year that the iSchool has entered the three-day cyber defense event.

The Collegiate Cyber Defense Competition focuses on the operational aspects of managing and protecting an existing “commercial” network infrastructure, letting students test their knowledge in an operational environment, while also giving them an opportunity to network with industry professionals.

Bahram Attaie, iSchool assistant professor of practice and the team’s advisor, says the competition is an interesting one for students. “A lot of security competitions, there’s hacking for the sake of hacking, or [various types of] security exercises. But CCDC is more from a professional perspective. The whole idea is you have a real-world network that you have to defend against the bad guys,” he says. This competition also presents a unique chance for students to interact with working professionals regarding the types of security and operational challenges the students soon will face upon entering the job market, he added.

The event’s structure, where each team faces realistic cyber security scenarios, provides the students with a situation where, “Your network has to be up, your server has to be up, and you have to maintain your system,” Attaie says, and “the students are really learning how to defend a real-world network system from a real-world security perspective.” The value for students is that such a situation helps them to be “truly seasoned to the point where they are professional grade, but they have a lot of fun doing it, too,” he adds.

Graduate student team member Bejar observed that the competition is not only a technical challenge, but a business challenge as well. “Participants must respond to ‘manager’ requests while keeping hackers out of their network,” he notes, an element that mimics real-world situations. That is a sense of realism reflecting the workplace, too, since sometimes managers “end up requesting things that are either harmful for the network or almost impossible to accomplish,” Bejar says.

Bejar says the nature of the event pushes him to try new things and “think as a hacker, and find all the vulnerabilities in your systems before they do. Otherwise, you will probably not last too long in the competition.”

Second-time team member Herbert says he “really enjoys the competitiveness and opportunities that CCDC presents to us. You get to experience a real-world situation while also being able to network with industry professionals and your peers from other schools.”